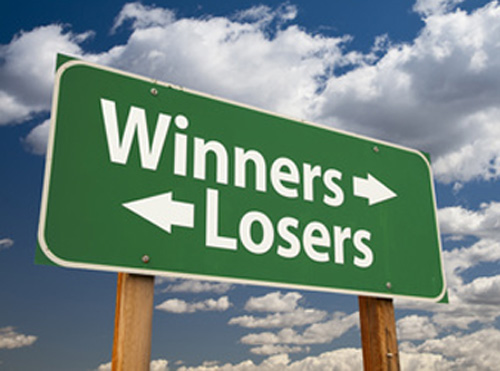 From the patently obvious file:  I know nothing about professional journalism – or the newspaper business, for that matter.

I’m essentially a retired schmendrick with too much time on my hands, but I know good reporting, and I appreciate its motivating influence on civic progress.

And, I have an opinion about everything. . .

In recent months, I’ve become a real cheerleader for the Daytona Beach News-Journal – our local newspaper of record, who, like an aging grand dame, keeps changing her appearance hoping to draw the attention of youthful suitors.

In my view, the caliber of recent investigative reporting, community meetings, and enlightening multi-part series have shown what our old gal on Sixth Street is capable of when she really tries – but these near constant micro-changes must stop while we still have something worth opening in the morning.

Frankly, the people I talk with are losing interest.  Fast.

I don’t know about you, but I could give a Tinker’s damn about the France mansion.

And how much more of the big “Country 500” – an overpriced package show at Daytona International Speedway – must we endure?

Not to mention every time someone farts in the Minto Communities corporate office, Clayton Park is there to report on the beauty of its resonance.

Earlier this week, editorialist Scott Kent announced that our letters to the editor will be limited to 250-words, preferably less, in keeping with the new “aesthetically pleasing” layout – while what passes for the “Local” section continues to compress into a single sheet brief.

Frankly, I don’t give a fig about how visually appealing a newspaper is, or isn’t.  The NJ’s first metamorphosis was okay – now, it’s just gilding the lily.

When it comes to consuming the news, I’ll take quality of content over appearance every time.

For instance, on Sunday – and again on Monday – readers were greeted with lengthy pap and fluff on the Country 500 hoedown.

Front page, above the fold.

Then, on Wednesday, we were presented with essentially a giant real estate advertisement announcing that the late Betty Jane France’s 17,000 square foot home, and all her worldly belongings, are being hawked to the highest bidder.

I understand there is dramatic interest in watching a life of great wealth and privilege being sold to the tune of an auctioneer’s rhythmic chant, but how in the hell does that touch my life in any appreciable way?

Clearly, my interests may differ from yours – and the lifestyles of Daytona’s rich and famous may well draw fans in some gated communities north of Ormond Beach – but the rest of us ham-n-eggers down here in the trenches need more substance.

I hope that once the Daytona Beach News-Journal finishes putting on its make-up and settles on an outfit it will get back to the hard work at hand.

In my view, the momentum started by the ‘Tarnished Jewel’ series has resulted in incredibly positive happenings at City Hall – a real movement with grassroots support that may well serve as the impetus for the revitalization of our beachside and core tourist areas.

At the recent beachside town hall, editor Pat Rice assured us that the News-Journal’s in-depth reporting on the serious issues we collectively face will continue.

With so much happening – positive and negative – in the Halifax area, we desperately need a free and inquisitive press to throw back the curtains of power, report the facts, and provide residents with a comprehensive overview of the who, what, when, where, why and how here on the Fun Coast.

Note to Mr. Rice: Turn the Big Dogs out and let them eat.

There are enough jacklegs like me bitching and opining about the news of the day.  We’re a dime-a-dozen, feeding off current events like a pack of those ugly buzzards you see taking a dead armadillo back into the food chain on the side of State Road 40.

What we really need is independent investigative journalism with a laser focus on exposing the inner-workings of our weird oligarchical power structure that has resulted in the destruction of one of America’s most famous tourist destinations and crippled our natural economy.

It is refreshing to see the Daytona Beach News-Journal finally holding public entities and politicians accountable – and reporting the good, the bad and the ugly about a rigged system that has put profits above progress and compromised the public trust for the benefit of special interests.

As I’ve said before, given the enormous response to recent local coverage, I believe it is possible for the News-Journal to remain both relevant and profitable without these redundant costume changes.

It’s time once again for Uncle Marky to turn a jaundiced eye toward the newsmakers of the day – the winners and losers – who, in my humble opinion, either contributed to our quality of life or detracted from it in some significant way.

Since his appointment earlier this year, he has worked tirelessly to bridge the gap between law enforcement and the citizens it serves.

In doing so, he is opening non-traditional lines of communication and fundamentally changing the way Daytona Beach residents view, and interact, with their police department.

In a recent article in the News-Journal, Chief Capri spoke of the importance of sincere outreach to changing perspectives on both sides of the badge, “People can talk community policing, but unless you practice it and live it, it’s not something you can just turn on and off, it’s got to be a culture,” Capri said.

From literacy programs to fun activities, like bicycle rides and fishing tournaments, the Daytona Beach Police Department is doing it right.

And the agency is getting its important message out to the community like never before.

The fine men and women of DBPD are building important bridges and developing a sense of mutual respect and trust with young people.  And the department’s increased presence on social media has modernized the way police and the community interact.

Most important, Craig Capri is the genuine article – someone who leads from the heart – and he’s clearly in it for all the right reasons.

You know, Beachcombers Wellness and Orange City aren’t really assholes – the company administrates inpatient drug treatment centers to meet a serious need in Florida, and Orange City is a quaint community in West Volusia.  Both are just trying to get by.

Recently, the owners of Beachcomber Wellness decided it would be right to locate an adult treatment facility in the Alling House Bed and Breakfast – which just happens to be in Orange City’s beautiful Historic District.  Naturally, residents came out in force to explain to their elected officials that there is probably a better place for a drug rehab center.

But, in Beachcomber’s defense, you’re telling me that Orange City officials couldn’t work with the company to find a more suitable location for this in-demand service?

Volusia County has a real need for quality drug and alcohol treatment and rehabilitation facilities.

Abuse and addiction has touched nearly every family I know, and it’s a problem that isn’t going away on its own.

In 2016, some 262-people died from drug overdoses here on the Fun Coast – and that number is expected to rise this year.

In my view, this represents a real need – and a great opportunity for our highly-touted ‘economic development’ types to work cooperatively with Beachcombers Wellness Center and other rehabilitation providers to find suitable locations to establish their businesses.

In Orange City, this isn’t a “Not in my backyard” issue – it’s a matter of appropriateness.

Like putting a homeless assistance center in the middle of an upscale yacht basin – it just doesn’t make sense in the long term.

In my view, Volusia has enough vacant space to accommodate just about any type of industry or service in numerous suitable locations throughout the county.

It simply requires effort, creativity, and a comprehensive vision for meeting current and future needs.

That’s something else we’re sorely lacking here in Volusia County.

Sage advice says you don’t put the cart before the horse – and you damn sure don’t launch a $9-million “Community Center” without knowing what your potential return on investment will be.

You must cool and heat them, insure the building and its occupants, patch them up when they get damaged, provide preventive maintenance, clean, sweep, mop, dust and periodically update their interior and exterior.  They need modern furnishings and functional elements that will make them attractive to potential renters – a life-cycle that requires constant polishing, marketing and salesmanship to accomplish.

Look, everyone knows that civic centers and municipal amenities rarely, if ever, pay for themselves – you’re lucky if they break even.  But these facilities play an important role in meeting the cultural, artistic, recreation and entertainment needs of a community.

Almost inexplicably, in April, Deltona’s new Events Manager, Chris O’Donnell, estimated annual revenues from the still under construction community center at some $970,700 – far more than what similar public facilities in the area produce.

Interestingly, when you include debt on the building, that figure matches the center’s estimated expenses.

Yep.  Like any good bureaucrat, it looks like Mr. O’Donnell just pulled a number out of his ass.

All of this comes before the Deltona City Commission have finished their policy discussions –  including the question of whether the city will opt out of alcohol sales.

These are significant issues, all of which will ultimately impact Deltona’s bottom line.

In my view, it was incumbent on City Manager Jane Shang to oversee this important (and incredibly expensive) project in a professional and efficient manner.  That includes ensuring that the important decisions are brought before the elected body in a logical sequence, supported by the best information available.  That’s her job.

It appears that hasn’t happened.

This latest misstep is indicative of much larger problems in Deltona government.  It’s ugly.

In my view, nothing is going to change until Ms. Shang moves along.

You’ll want to stay tuned to this one.

Am I wrong about this?

The City of Daytona Beach has begun charging $3 for Friday night concerts at the Bandshell – and $10 for the “VIP” treatment (which includes a chair) plus “applicable fees.”

Although a series of Saturday night shows will remain free, the fact that what was quickly becoming a great source of inexpensive weekend entertainment for area residents and visitors is now becoming a paying gig for the City.

That’s disturbing to me.

Look, I get the fact that no one is entitled to “free” anything – but these shows were widely attended by local families and tourists – a real draw to our long-suffering beachside and, in my view, a positive use of public recreation funds.

It was also a shot in the arm to Friends of the Bandshell.

Trust me.  The few bucks Daytona Beach will squeak out of these Friday night shows pales in comparison to the millions-of-dollars that have been stolen and squandered in the name of generating interest in our beachside over the past 30-years.

Bringing life back to the Bandshell pays dividends across our community – why stifle actual progress with a cheap money grab?

In my view, given the deplorable conditions on the Boardwalk, anything that returns people and activities to that abject wasteland is a good investment for the future of our long-suffering core tourist area.

Quote of the Week:

Have a great weekend, kids!