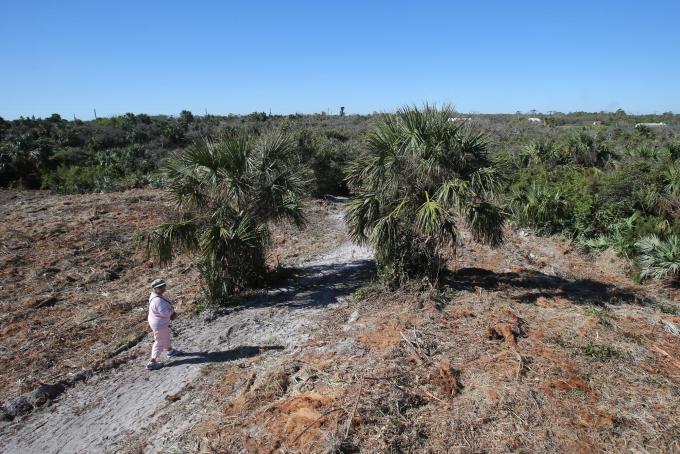 Why is it that some elected officials – even when their constituents point out the patently obvious errors and omissions of government – still insist on maintaining their pathological grip on “power” over the people they have taken an oath to serve?

For instance, last week residents of the North Peninsula stood by in horror as a county employee took a piece of heavy equipment and turned a large swath of Bicentennial Park into a moonscape.

As described by the Daytona Beach News-Journal, the work churned the area into, “. . .a tangled mess of ugly brown debris along an otherwise scenic nature trail.”

Well, almost a decade ago, residents began asking Volusia County to provide separate areas for large and small pets, and two-years ago, a group requested that officials provide additional amenities.

In typical fashion, our sloth-like behemoth of a county government did nothing – until last week when, suddenly, they clumsily turned the natural setting into a “tangled mess.”

Look, everyone understands that these things take time, I mean, there are environmental concerns to address, and permits are required before destroying the habitat of protected species.

Except, Volusia County didn’t bother to obtain the required permits, even after their own environmental monitors found 14 gopher tortoise burrows on the property.

When visitors to the park observed the wholesale destruction of the areas natural setting – some intrepid souls made a formal complaint to the Florida Fish and Wildlife Commission.

In typical fashion, FWC issued a stop work order until proper inspections could be performed and permits obtained.  Then – just one week later – after “discussions” with county officials, FWC issued a statement saying, “They were good with what they did without a permit.”

“They (Volusia County) have always been good partners and have done their due diligence.  No harm, no foul.”

Why is it that whenever one government agency is required to regulate another, direct violations of environmental codes and laws protecting endangered wildlife are always chalked up as “no harm, no foul”?

Anyone remember last summer when an influential DeBary developer strip-cleared some 30-acres of land along Fort Florida Road – effectively grinding a pristine forest into a primordial ooze without any permit or authorization”?

Then, DeBary’s hapless growth management director, Matt Boerger – who literally stood around with his head in his ass while the unauthorized destruction progressed – added insult to injury by allowing the violator to continue work and clean up the “unsightly mess” – and, I suspect, destroy evidence of environmental crimes before FWC investigators could respond.

The FWC was unable to find any evidence that gopher tortoises had been harmed during the wholesale destruction of the land – even though area residents described witnessing something entirely different.

Did I mention that both Boerger – and the offending developer – are still happily at work “managing growth” in the City of DeBary.

How do you think the Florida Fish and Wildlife Commission, and the St. John’s River Water Management District, would respond if you or I simply decided to take a Cat D9 and begin scraping every ounce of flora, fauna and habitat from private land?

Within days, the full-weight of local, state and federal regulatory agencies would issue bone-crushing fines, fees and legal sanctions.  Yet, whenever government is called to police itself – or projects and consultancies owned by the politically influential – it’s no harm, no foul.

This evening at 6pm, Volusia County officials will hold a public meeting at Bicentennial Park to explain why the project languished – for years – and try hard to convince us that no wildlife is being harmed during the commission of this environmental debacle.

They claim that the public will have a chance to provide input as well.

According to our doddering fool of a Council Chairman, Ed Kelley, our elected officials are going to do what they want regardless of our concerns.

My God.  What an arrogant asshole.

You know, I don’t recall that sense of omnipotence and aggressive superiority anywhere in Eddie’s campaign literature.

But I damn sure won’t forget it whenever any incumbent stands for reelection – and I hope you won’t either.

Once again, our elected officials on the dais of power in DeLand have effectively grabbed We, The People by the collective throat and made it clear that our input is neither wanted – nor required.

In fact, our petty concerns are an annoying hindrance to their idea of “progress.”

As Ed said, they will do what they want – when they want – and damn the wants and needs of us unwashed hordes who exist solely to pay the bills.