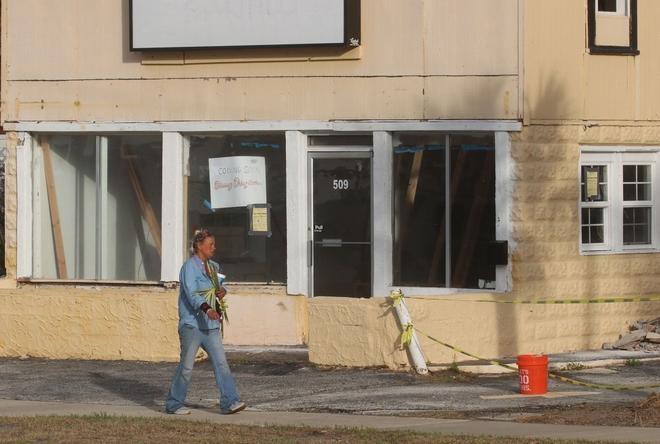 You know, since this piece was published this summer, I’ve warmed up to the “Grippa Group” – at least I came to recognize this impressive brain trust as our last/best hope of recovering from the tailspin that has left the Halifax area in blighted tatters.

I think it’s clear that they have worked diligently – and I applaud their efforts.

I’ve also come to learn this committee may not have been another beach driving grab.

It seems they caught Volusia County bureaucrats doing what government bureaucrats do – obfuscating, avoiding specifics that one could be held to account for, and trying hard to keep the final report to our elected officials arbitrary and completely devoid of substance.

Of course, Clay Ervin, the county’s director of Growth and Resource Management, who “coordinated” the committee’s meetings, told the group he planned to add “detail” – which I assume means colorful pictures, a corresponding puppet show and an educational cartoon featuring “Crusty the down-at-the-heels Pelican” – to help our elected officials understand the committee’s suggestions once they are adopted.

You know, pretty things up for those hapless rubes on the County Council.

So, it’s going to be at least March before we hear the Grippa committee’s recommendations – and that’s okay.

Hell, take all the time you need.  What’s the rush?

However, if this impressive group of “community leaders” exposes itself as just another well-managed shill for County Manager Jim Dinneen’s push for a one-cent sales tax for transportation infrastructure, well, no one – and I mean no one – will ever trust anything proposed by this craven administration again.

I’m often asked by regular readers of this forum, “Hey Mark, why is it that nothing ever changes in the Halifax area?”

Since I have an opinion on literally everything, I do my best to camouflage the fact that I don’t have a flipping clue when it comes to active solutions to the myriad issues we face here on Florida’s fabled “Fun Coast.”

As I’ve reported before, I’m more of a complainer than a doer.

But I don’t want my blatant ignorance to show either.  That’s considered poor form for an opinion blogger.

So, in my practiced way, I lean back and pensively massage my beard like some wise old sage contemplating the meaning of life, tap the eraser of my Blackwing Palomino on the desk, stare contemplatively into space, then lean in close, like I am about to impart some ancient secret, before offering my best Yogi Berra-like answer sotto voce:

“Things never change here, because they always stay the same.”

Invariably, smart people call me a fool and storm off in a huff, like some country rube who just got fleeced at a backwoods carnival – as I chase after them screaming, (in my best Jack Nicholson impression), “YOU CAN’T HANDLE THE TRUTH!”

It’s true, you know, nothing changes here because our core machinery – the system – and those with direct control of the money that fuels it – has remained effectively locked-down and stagnant for decades.

The internal structure of this long-term scheme is easy to discern, because their time-tested strategic ignorance of the obvious as an effective modus operandi is evident in everything they do or say – regardless of the issue or circumstance.

In the aftermath of the Daytona Beach News-Journal’s scathing exposé, “Tarnished Jewel,” which pointed out years of waste, blight and abject corruption on Daytona’s beachside, our elected and appointed officials in Volusia County formed the Beachside Redevelopment Committee, an ad hoc group charged with developing workable solutions to the festering shithole that is our core tourist area.

As is their way, members of the County Council ham-handedly selected and appointed all the right last names – and even (begrudgingly, right Ms. Post?) gave long-time beach advocates, Paul Zimmerman and Dave LaMotte a seat at the big-people’s table.

Then, at the first introductory meeting, former insurance executive and current Committee Chairman, Tony Grippa, immediately put Zimmerman and LaMotte in their place by admonishing that the group’s mandate required they “steer away from beach issues.”

As the News-Journal described the exchange, “Part of the discussion Monday night got into a tug-of-war between those on the committee who thought beach access needs to be part of their discussions, and those who reminded them that their marching orders from the County Council were to steer away from beach issues.”

Specifically, Grippa announced, “Beach management is not within the purview of the committee.  Certain issues have kept the community from developing.  Let’s start with things that can bring the community together.”

So there.  Sit down and shut the hell up, you beach-bums.

You’re among Very Important People here – so, act the part, get along and go along, okay?  (Grippa didn’t say that, I just thought it summed up my opinion of the exchange – and because I’m a hyper-cynical asshole.)

Any rational person (if there is such a thing anymore) was left with the unmistakable impression that the committee’s focus was on blight and dilapidation in that no-mans-land west of State Road A-1-A.

And while the group is comprised of movers-and-shakers from Ormond Beach to Daytona Beach Shores, everyone knows the concentration is “redevelopment” of the fetid squalor that encompasses many areas between Atlantic Avenue and the Halifax river.

And, for a while anyway, it appeared things were moving along smoothly for Mr. Grippa’s blue-ribbon committee.

All the right people were heard from – even Daytona Beach City Manager Jim Chisholm appeared before them and sketched out an overview of previous efforts, although I’m not sure he ever fully explained how $120-million in redevelopment funds seemingly evaporated with little, if anything, to show for it.

Then – at the August 21st meeting – “The System” injected its will and telegraphed the true ulterior motivation of our politically influential power brokers into the mix.

And just like that, the Beachside Redevelopment Committee lost all credibility.

During the meeting, the committee heard a report from Evelyn Fine – owner of Fine Research and Marketing – AKA Mid-Florida Marketing – the company that has been telling the Halifax Area Advertising Authority what it wants to hear for decades.

In what we all knew in our hearts was coming, Ms. Fine started by explaining the reason folks don’t want to vacation here is because of some “lingering stigma” associated with Spring Break – an event that has been dead and buried since the early 1990’s.

Then, Evelyn dropped the inevitable on the committee:

“There’s this big disconnect between people who come here and are very satisfied, and are comfortable with the cars on the beach because they’ve learned to accommodate it and learned to live with it, versus those people that have no vision of how their children and cars can coexist on a beach,” Fine said. “And that’s very real — same thing with spring break.”

The HAAA, the Daytona Regional Chamber, the Convention and Visitors Bureau – and any other entity wholly influenced by county politics – and those who control it – interjected their goals into the process by condemning beach driving as the boogeyman who has thwarted progress and redevelopment for the past 100-years.

In my view, Evelyn Fine is a shill – an overpaid mouthpiece for the outmoded and wholly ineffective groups that pass for “tourist” and “visitors” efforts in Volusia County.  Their collective order is to blame beach driving for anything and everything – while ignoring the festering neglect and filth that is eating Daytona Beach like a malignant cancer.

Frankly, Mr. Grippa should have shut that sideshow down, asked Ms. Fine to leave the building, and reiterated the committee’s mandate to “steer away” from beach issues.

You may remember that way back in 2011, the Volusia County Council commissioned a $100,000 tourism study conducted by the Strategic Advisory Group of Duluth, Georgia.  The net-net of that expensive report found that the current condition of the “tourism product,” notably the beachside of Daytona Beach, was a serious impediment to attracting visitors.

That includes the condition of hotels, storefronts in high-volume areas, a lack of attractive streetscapes in key locations – and widespread concern from stakeholders that “…there is no “plan” for who is leading the effort and how these challenges can be improved.”

“Without resources – leadership and economic – the overall tourism experience in Volusia County will decline.  An overall collaborative strategy is needed.”

Unfortunately, little, if any, of the recommendations made in the SAG study were implemented, a waste of effort – and money – that no doubt collects dust on County Manager Jim Dinneen’s credenza.

In a nutshell, despite the machinations of Ms. Fine and her programmers, members of Mr. Grippa’s committee should embrace the notion that no one wants to vacation in filth, crime and shabbiness – and our heritage of beach driving is the only thing that makes us unique in the marketplace.

6 thoughts on “Best of Barker’s View – On Daytona: The more things change, the more they stay the same…”