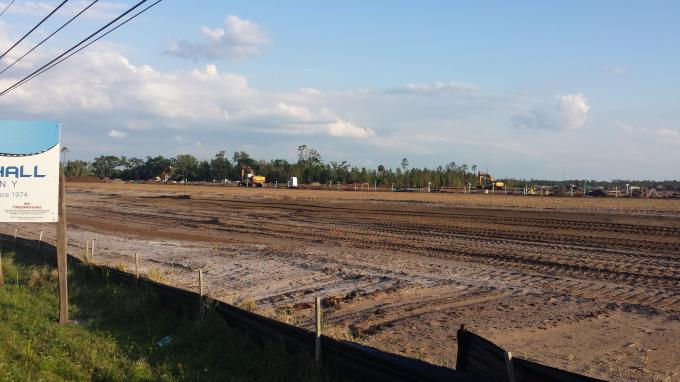 You may remember several weeks ago when a large brush fire originated from the site of Geosam Capital’s Coastal Woods mega-development in New Smyrna.  The blaze spread from a pile of burning debris from clear-cut land clearing operations, closing traffic and commerce on Interstate 95 for nearly 18-hours.

In total, the 844-acre Coastal Woods development will include some 1,400 homes and commercial areas situated along State Road 44.

According to the News-Journal, St. John’s River Water Management District documents show that nearly half the site was wetlands.

In recent days, citizens living in the area have reported billowing clouds of dust rising from the moonscape where environmentally sensitive pine scrub and wildlife habitat once stood.  The powdery dirt is carried on the breeze to surrounding residential areas and has covered everything in its path – cars, pools, homes and people – in a fine patina of filth.

Now, we have learned that the clearing and other work in three separate sections of the Coastal Woods subdivision was conducted without proper environmental permits.

You read that right.

According to the Daytona Beach News-Journal’s environmental reporter Dinah Voyles Pulver – whose work on the Debacle in Debary should have won her the Pulitzer Prize in investigative reporting – the St. John’s River Water Management District (the regulatory agency that protects and preserves our drinking water supply) has been begging Geosam since February to file conservation easements for wetland impacts on two already completed sections of the project.

According to the News-Journal, during a site inspection in March, district officials determined that another parcel had also been “entirely cleared and grubbed, and was being graded” with the required permit application still incomplete.

At that time, the SJRWMD compliance coordinator, William Charlie, “recommended” that Geosam cease construction operations on that site.

Jesus – let’s not go crazy here.  I mean, the district went so far as to “recommend” work should be stopped until permits are issues?

Wow.  Our environmental watchdogs don’t mess around when speculative developers rape the land, destroy wetlands and uplands, then leave a dusty gash in the earth, do they?

You have open and on-going permitting violations and incomplete applications, a strong “recommendation” that the company stop work, flagrant disregard for state environmental regulations and those charged with ensuring compliance – yet, the SJRWMD issues a permit for work to continue at the site?

I mean, one would think our old friend Long John Miklos was involved.

You would be right.

Records indicate that Geosam Capital employs Bio-Tech Consulting – an Orlando-based environmental consultancy whose president just happens to be John Miklos – who just happens to serve as the powerful, multi-term chairman of the St. John’s River Water Management District’s governing board.

According to the News-Journal, “This case is the third time on record in five months that a company using Bio-Tech Consulting has run into trouble with the water district for doing work without the required permits.”

Last December, the Good Old Boy’s Investment Club over at Consolidated-Tomoka Land Company – also a Bio-Tech customer – was caught red-handed churning up wetlands without a permit.

And why wouldn’t they?

As that tormented pervert, the Marquis de Sade said, “In an age that is utterly corrupt, it is best to do as others do.”

In 2016, the Florida Commission on Ethics investigated a citizen’s compelling allegation that Miklos was using his gubernatorial appointment as chairman of the St. John’s River Water Management District for personal gain.

After all, you don’t have to be Elliott Ness to deduce that Bio-Tech Consulting is paid to lobby and influence the official decisions of the very regulatory agency Mr. Miklos oversees – a classic Fox in the Hen-house scenario.

In my view, a blatant conflict of interest that Miklos attempts to sidestep by simply recusing himself from key votes involving his company’s clients.

In December 2016, the Commission on Ethics – meeting behind closed doors – ignored the findings of their own investigators, blocked an administrative hearing regarding the allegations and acquitted John Miklos on all charges.

One would think that with Governor Rick Scott in a tight race for the United States Senate, Slick Rick would have grown tired of the near-constant embarrassment of his hand-picked chairman’s greed-crazed shenanigans – but this is Florida – the rules are different here.

I’ve said this before, in my jaded opinion we live in the most corrupt county in the most corrupt state in the union, where the cockamamie decisions of the very ethics tribunal charged with protecting us from politicians and political appointees with a profit motive reverse the conclusions of professional investigators and thwart the process for an independent finding of fact.

In my view, it is prima facie evidence that We, The People are screwed.

I believe John Miklos, and the shameless developers he serves, epitomize the worst-of-the-worst – leeches that thrive in a system where cheap enablers and appointed fixers are permitted to subvert the rules and give their collective middle-finger to the regulatory agencies they control – all while openly destroying the environment, churning wetlands and wildlife habitat into muck, and turning our few remaining natural places into moonscapes in their brazen pursuit of the almighty dollar in a place where the ends will always justify the means.