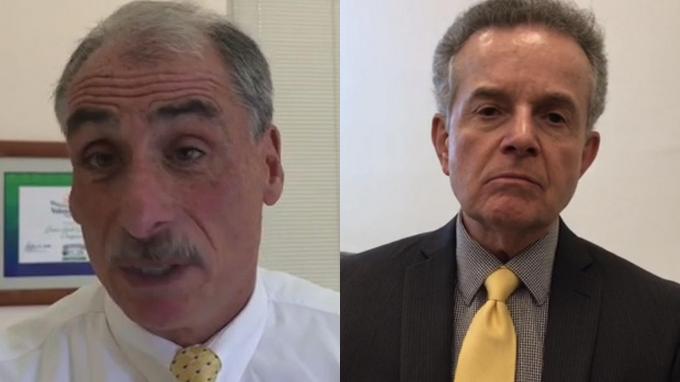 Love him or hate him, Sheriff Mike Chitwood tells it like he sees it.

For the first time in decades, the citizens of Volusia County have a fresh set of eyes inside the tattered carnival tent that passes for governance here on Florida’s beleaguered Fun Coast – and Sheriff Chitwood’s frequent reports of his observations of the dark side do not paint a pretty picture of this dictatorial oligarchy that continues to hamper substantive progress and ensure that the Donor Class has unfettered access to the public teat.

Frankly, Sheriff Chitwood’s column in Sunday’s Daytona Beach News-Journal entitled, “County Manager has too much power, too little accountability” reads more like a Barker’s View Angels & Assholes rant than a community voices piece – but, damn if he didn’t get the point across.

The Sheriff’s incredibly insightful article began with perhaps the most chilling revelation I’ve ever heard from a sitting elected official.

According to Sheriff Chitwood, “One of the first greetings I got when I was elected as your sheriff was a warning from our County Manager Jim Dinneen. The message was play nice or my time as sheriff would be brief.”

In most places, the shocking nature of that frightening disclosure by the county’s chief law enforcement executive would go through the organization – and the community – like an ice water enema.

In Volusia County, we have come to accept this level of gross institutional corruption as ‘business as usual’ – a system where the County Manager, with the political insulation afforded by a few uber-wealthy campaign contributors, feels comfortable threatening the tenure and independence of an elected official, and subverting the will of the electorate, should the Sheriff fail to acquiesce and play nice in the Kingdom of Jim Dinneen.

The News-Journal recently reported that the county’s medical examiner, Dr. Sara Zydowicz, resigned her position after just one month.

Although Sheriff Chitwood stopped short of discussing the ME’s reasoning for fleeing Volusia County government, he clearly felt compelled to expose the fact that the medical examiner’s office – a service of vital importance to our criminal justice system and community – has been subject to “years of neglect by our county manager.”

For months I’ve been harping on Mr. Dinneen’s complete lack of public asset management – allowing county buildings to strategically rot into the ground as a means of demonstrating the need for a Taj Mahal replacement facility – all while contributing to blight and dilapidation in the very neighborhoods and commercial areas many governments and entrepreneurs are working hard to escape.

When our elected Sheriff makes the bold public statement, “Those in power will do anything to maintain their stranglehold” perhaps it’s time we listen?

Clearly, Sheriff Chitwood’s statement is bolstered by the undeniable fact that a few local political insiders are willing to inject hundreds of thousands of dollars into county council races – then reap a return on that investment in the form of massive economic development incentives, tax abatement, infrastructure enhancements and other direct paybacks which use public funds to increase private profits.

The evidence that our system of county governance has been hijacked is not just compelling, it has become our collective reality.

This bastardized system that consolidates power in the hands of a demonstrably unscrupulous individual with malleable ethics and a preternatural ability to dodge accountability has replaced any semblance of a representative democracy where our elected and appointed officials are responsible to their constituency.

In my view, Sheriff Chitwood’s op/ed deserves our undivided attention.

As I have written before, Mr. Dinneen is perfectly willing to lie like a cheap rug whenever a blatant falsehood serves his purpose or those of his political handlers.  In fact, I believe – as Sheriff Chitwood has previously said – that Mr. Dinneen is a pathological liar with a compulsion to fabricate situational responses on the fly – a strategy that has ultimately cost county government the trust of the people it exists to serve.

In most successful public and private organizations, positions of high responsibility have a corresponding level of accountability that balances power with oversight.

The very concept requires that people in positions of high power be ultimately held answerable for their actions in the conduct of their individual or collective responsibilities.

In our democratic system of governance, the will of the people is the basis of all government authority.  When public officials and institutions lose the trust and consent of the people, we have a right and responsibility through the electoral process to replace elected officials who enact policies counter to the interests of their constituents with servant-leaders who will restore honor and basic fairness to the process.

That includes our current crop of cowardly politicians on the dais of power in DeLand who continue to turn a deaf ear each time Sheriff Chitwood sounds the klaxon – exposing the level of Mr. Dinneen’s abject incompetence that has brought us to this dangerously low period in Volusia County’s history.

4 thoughts on “On Volusia: Sheriff Chitwood is Right”