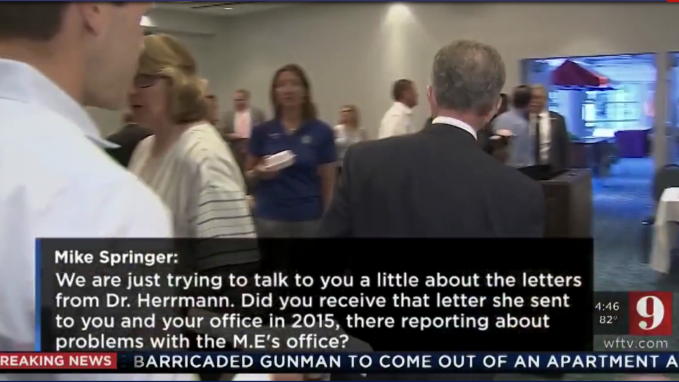 Before you read this, I need a favor.

Bop over to https://tinyurl.com/y7hup4gg and watch as the intrepid investigative reporter Mike Springer of WFTV’s Daytona Beach Bureau and his photojournalist work valiantly to corral our wily County Manager and seek answers to growing questions surrounding the cover-up of serious issues at Volusia’s District 7 Medical Examiners Office.

The German’s have a word –  Fremdschämen – to describe vicarious embarrassment, that weird second-hand feeling you get when someone should feel a deep sense of shame, yet they seem completely unaware of just how humiliating their behavior truly is – so, you experience intense embarrassment for them.

They also have a term – Schadenfreude – which translates roughly to “the pleasure derived from the misfortunes of others,” the cruel sense of pleasure, joy or self-satisfaction that comes from witnessing the failures or utter humiliation of others.

But what does one call the exhilaration of experiencing both Fremdschämen and Schadenfreude simultaneously?

May God help me, but the sight of Jim Dinneen – Volusia County’s omnipotent chief executive who currently commands over $300,000 annually in public salary and benefits – fleeing the working press like a boss rat leaving a burning garbage scow was priceless.

After I watched the clip about, oh, a thousand times, my mood changed – I went from peels of maniacal laughter to racking sobs.  I felt like one of those poor victims of that rare neurological disorder from the television commercial where symptoms alternate from uncontrollable laughter to an inappropriate crying jag.

When I finally gained my composure long enough to think critically about what I – and thousands of other Volusia County residents – had just witnessed in Mr. Springer’s outstanding reportage, I became angry; overcome by a crushing sense of disgust as I realized we have finally reached the nadir of this shitstorm that passes for governance here on Florida’s Fun Coast.

In this short clip, we see an all-powerful government executive who has arrogantly refused to answer a reporter’s legitimate questions regarding the myriad debacles, blunders and good Old Fashioned organizational mismanagement that has marked the waning days of the Dinneen administration, finally being brought to justice before the Court of Public Opinion at the monthly meeting of the haughty Knights of the Roundtable of Elected Officials meeting at Daytona “International” Airport yesterday.

Little Jimmy was trapped like a rabid rodent – scurrying about in perhaps the best chase scene captured on film since the French Connection – before squawking a warning, turning on his heel, and beating a cowardly escape by ducking into an “Authorized Personnel Only” area.

In my view, the best part of this tragicomedy was the slack jawed look on the faces of area mayors and city managers who stood, mortified, watching the uncomfortable scene unfold with their collective buttocks clenched so tight they later passed diamonds.

(Sorry, my transient pseudobulbar affect is acting up again – I can’t help myself – too damn funny. . .  Get a grip, Barker.)

In reality, this vignette was an unfortunate reminder for the long-suffering citizens of Volusia County who have been robbed of the respect, trust and confidence they have the right to have in their government and the essential services it exists to provide.

For years, We the People, have been forced to stand by and watch as this rudderless ship of fools drifted ever closer to the rocks – all while the Dinneen administration and those spineless dullards we elected to represent our interests on the dais of power in DeLand – turned away from the real needs of their constituents and focused sole attention and public assets on the wants of uber-wealthy oligarchs who lurk in this shadow-world that churns our hard-earned tax dollars into private profits.

All while vital public services and county-owned facilities were allowed to rot from the inside out.

It has been a frustrating journey for anyone who cares about good governance and the best traditions of our representative democracy – and our foul path is littered with the good reputations of dedicated professionals like Dr. Sara Zydowicz, who cared enough to voice her very real concerns of budgetary neglect and substandard facilities to the Florida State Medical Examiner’s Commission – only to be publicly mauled by our complicit elected officials.

Given what we know now – supported by real physical evidence exposing Mr. Dinneen’s damnable lies and manipulation as uncovered by good people like Sheriff Chitwood, WFTV’s Mike Springer and others – there is simply no way our doddering fool of a County Chair, Ed Kelley, and his debased “colleagues” on the Volusia County Council can accept this stonewalling and craven self-protection by a highly compensated executive.

Now the onus is on them.

Willful blindness – the act of intentionally keeping oneself unaware of facts that would make them complicit in this continuing sham by those we elected to protect our interests – is no longer acceptable.

Given this unbelievable snippet of film, which, unfortunately, is not the first time Mr. Dinneen has run like the lily-livered simp he is from the bright light of a news camera – is indicative of all that is wrong in county government – a dark place where honestly and transparency have been replaced by a siege mentality that values lock-step conformity over ingenuity and free-thought – and secretiveness over the open and honest debate of ideas in the public interest.

As the great Hunter S. Thompson said, “In a closed society where everybody’s guilty, the only crime is getting caught. In a world of thieves, the only final sin is stupidity.”

You can run, but you cannot hide, Mr. Dinneen.

Ladies and gentlemen, this is not legitimate.

This is not right.

This bears absolutely no resemblance to a government of the people, by the people and for the people.

Clearly our elected officials either cannot – or will not – act in the public interest and terminate the reign of this tin-pot autocrat who has besmirched the reputation of our county and shit on the guiding ethics and principles of his profession all while dodging personal and professional accountability.

Now, it is time for outside intervention.

I join with Sheriff Mike Chitwood, District 1 candidate Jeff Brower and the growing chorus of other concerned citizens who are calling for outside intervention – an independent investigation of this repugnant sham that is ruining Volusia County.

I hope everyone this post reaches will do the same.