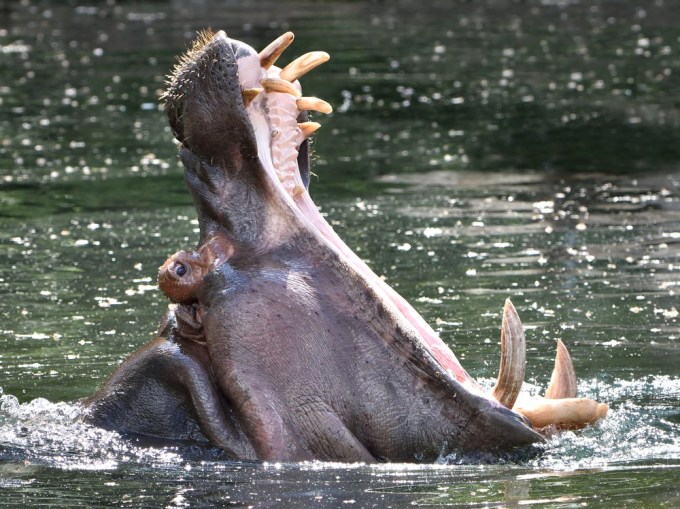 I’ve never been on Safari, but I’ve seen nature documentaries showing the destructive potential of the Hippopotamus – a brute which can reach 10,000 pounds.

While these giant herbivores appear to be awkward and hulking, in truth, they can run up to 14 miles per hour on land, or conceal themselves underwater and lope along the bottom of rivers and lakes with incredible grace and speed.

The hippo also ranks among the most dangerous animals in the world, responsible for more than 3,000 deaths each year.

Jesus.  Imagine a five-ton behemoth barreling down on your ass, tusks flashing, tearing up the tundra on the Tanzanian veld, attempting to crush, drown then swallow you whole?

There is no reasoning with a Hippopotamus, and they are described by scientists as “notoriously unpredictable.”

They are programmed to eat and make little hippos – and woe be to anyone or anything that attempts to interrupt that process.  Once a big bull sets those broad-set eyes on something he perceives as a threat, well, it’s probably too late, and few survive the encounter.

I was reminded of the similarities between these great beasts and certain real estate developers who are quickly exploiting our current “make hay while the sun shines” growth management plan – a slash and burn strategy to clear-cut and pave over as much greenspace, in the shortest amount of time possible.

I recently read an interesting article posted by a former colleague, now in the private sector, discussing a recent survey that found community growth is the Number One issue that keeps local government officials awake at night.

Ranking above strategic planning, increased community engagement or even the budget, how to enlarge their communities and increase growth opportunities is what consumes many public officials today.

The ‘Bigger is always Better’ syndrome.

Historically, one of the problems Floridian’s face is that real estate developers have a much better lobby than We, The People.

They also have a clear strategic focus that ensures maximum profitability on every acre or parcel within their control – even if it means skirting the letter and spirit of environmental regulations – or turning elected representatives into aggressive shills through our spongy campaign finance laws to ensure their projects come to fruition.

That’s a very effective strategy – up until the moment long-suffering residents become wise to the ‘pay to play’ scheme and organize to toss the bums out and replace them with responsive representatives who see ‘growth management’ as something other than turning every available square foot of nature into another half-vacant strip center in the name of “progress.”

In matters of influencing public policy – there is strength in numbers.

At a recent “smart growth” forum hosted by The Daytona Beach News-Journal, an estimated 200 of our friends and neighbors turned out to have their questions answered.

In New Smyrna Beach, citizens are starting to look like Frankensteinian villagers as they demand their voices be heard on the issue of unchecked growth, which is quickly ruining the character of this quaint beach community.

In Ormond Beach, those intrepid souls of CANDO II – real grassroots activists who are beginning to impact the politics of growth and development – as they work to preserve their quality of life and the ‘small town’ atmosphere that other cities are spending to re-create.

Unfortunately, there is also a weird school of thought among our ‘Rich & Powerful’ when it comes to managing growth – and their voice is a lot louder than yours and mine.

For instance, consider the interesting “conservation” mindset of Prince John Albright, CEO of Consolidated Tomoka, a Daytona Beach-based company whose land sales in recent years included sites of some of the major projects that are poised to bring thousands of new homes as well as dozens of stores, restaurants and other businesses to the area, including the new Latitude Margaritaville 55-and-older and all-ages Mosaic “full life” communities going up off of LPGA Boulevard, just west of Interstate 95.”

After sitting as a resident “expert” on growth at the News-Journal’s community forum, Prince John followed up with “some data points that perhaps get overlooked or even not realized when talking about ‘smart growth’ and as some of it pertains to CTO (Consolidated-Tomoka).”

He went on to explain that the good ol’ boys investment club over at Consolidated-Tomoka has put over half their land holdings into conservation in the past 20-years – with some 13,000 acres sold to the state for Tiger Bay Wildlife Management Area – which “puts a cap on residential growth potential.”

Prince John would also have us believe, “Daytona Beach’s current residential building permits are WELL BELOW its 30-year average thus one may ask, what growth?’ I think the recent growth concerns have come about because there hasn’t been ANY growth for a very long time.”

Did he just say, “What growth?”

Here are some interesting “data points” Mr. Albright conveniently forgot to mention when discussing just what prompted Consolidated-Tomoka to suddenly get all warm-and-fuzzy over mitigating the environmental impacts of recent westward sprawl:

In June 2016, the U.S. Department of Environmental Protection issued a consent order requiring Consolidated-Tomoka – without admitting wrongdoing – to restore 107.9 acres of wetlands, create another 41.26 acres of wetlands, and pay a fine in the amount of $187,500, after allegations the company illegally dredged and filled some 163 acres of wetlands on 3,500 acres it owns west of I-95 and north of LPGA Boulevard.

You might recognize that area as on or near the current site of that “Parrothead Paradise” – Jimmy Buffett’s own Latitudes Daytona – a 6,900+ residential and commercial monstrosity by Canadian mega-developer Minto Communities.

Did I mention that the “environmental consultant” hired by Consolidated-Tomoka to ramrod the permits for the Margaritaville project just happened to be Bio-Tech Consulting, Inc. – whose president just happens to be Long John Miklos – who just happens to be the sitting five-term chairman of the St. John’s River Water Management District?

This typically Florida-style farce has become a running gag – mega-developers hiring Mr. Miklos to lobby for their interests before the very regulatory agency he oversees – while our neutered ethics apparatus stands back and tacitly encourages the practice.

How fun.  How uniquely Floridian.

Then, in December 2017, Consolidated-Tomoka added insult to injury by starting work on the EPA ordered wetlands restoration project without first obtaining the necessary state permits.

For the record, mitigation credits are part of Florida’s goofy “hurt here, help there” system of allowing developers to purchase credits from a permitted wetland bank in exchange for harmful impacts to wetlands in “nearby” locations.

According to reports, Consolidated-Tomoka retains a 30% stake and management rights on the property which will now become a wetlands mitigation bank worth between $18 million and $59 million.

One thought on “On Volusia: Hungry, Hungry Hippos”