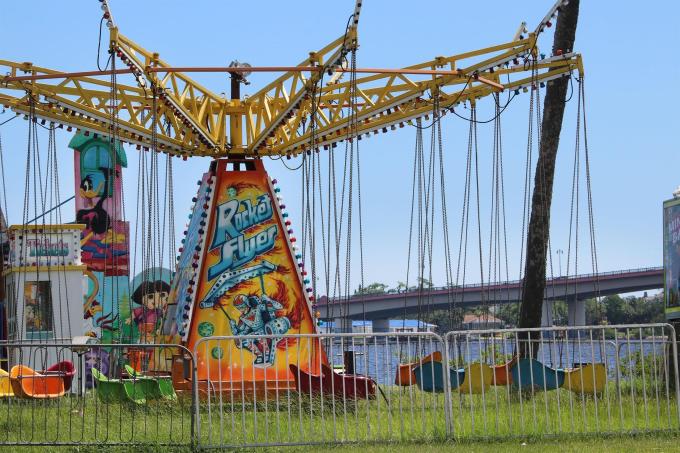 Did you see the report by The Daytona Beach News-Journal entitled “Riverfront carnival a flop”?

Most agree that traveling carnivals are like any guest:  You’re glad to see them come – and equally glad to see them go.  After all, the time-honored ‘Carny Code’ is GTFM – “Get the Fuckin’ Money” – and after the local rubes have been fleeced, it’s time to move along.

The News-Journal recently told the story of some slightly down-at-the-heels midway amusements which inexplicably set up for the second year in a row in an unlikely location on Beach Street between the no man’s land of Manatee Island and the News-Journal Center.

I found it strange.  But what else is new?

This isn’t the first time Hildebrand Rides, Inc. have parked their gimcracks and whirligigs – complete with garish neon lights and fading paint – some dotted among high weeds near the neglected Riverfront Park – others still loaded on semi-trucks and trailers.

In 2017, the King of Empty Promises, Daytona Beach Redevelopment Director Reed Berger, beat his chest with pride when he “convinced” the ride operator to put a few amusements at the Boardwalk – something Berger touted at the time as the next big thing – it was to be the beginning of our renaissance, “This is where we needed a catalyst to get that place cleaned up,” Berger said. “The timing all worked out.”

So, how did that work out for us, Reed?

You don’t have to be Hurcule Poirot to deduce that the presence of these shabby carnival rides in Downtrodden Downtown Daytona – like many things in the Halifax area – seem oddly out-of-place.

A check of the Hildebrand Rides website shows their season seems to be the fall fair and festival circuit – October to April (although it hasn’t been updated since 2012) – so my conspiratorial mind quickly went into overdrive and ran through the possible scenarios.

Was this some strange trade-off for Hidebrand Rides setting up on the Boardwalk and taking the heat off local redevelopment and tourism officials in the lead-up to the Shriners “mega-convention” – a clearly rushed process, without any request for proposals or competitive bidding process – or is it merely a misguided attempt to do something, anything, to salve the very real fears of Beach Street Merchants who are hanging on by their financial fingernails?

Or did a savvy carny determine that for the price of a permit he could warehouse his Tilt-a-Karts and Rocket Spinners in plain sight during the off-season – and maybe turn a quick buck in the process?

Why were the hours of operation never posted – at least anywhere anyone would see them – and why wasn’t the carnival ever advertised outside the esoteric Riverfront Shops website?

Did they expect word-of-mouth to serve the purpose, “Howdy, neighbor!  We’re taking the kids down to the big Community Carnival near Manatee Island – you know, across from the vacant motorcycle shops, on Uncle Hyatt’s new front yard?  Wanna come with?”

The operator claims to have spent some $15,000 in radio and television ad’s – but I’ll be dipped if I ever saw or heard one.

And why would the City permit food and drink concessions within a stones throw of places like Rhokkoh’s Frozen Yogurt and Tia Cori’s Tacos – two small year-round businesses that have openly struggled through hurricane flooding, the Great Homeless Occupation of 2016, civic neglect and other natural and manmade disasters?

And if, as the operator said in the News-Journal, he only planned to be on the site from June 29th to July 15th – and no one showed – why would he renew the permit to keep his boarded-up midway sitting idle on public property through Labor Day?

In late June, The Daytona Beach News-Journal reported that the carnival would run through July 15th – touting the fact that it’s three-day run in May 2017 “did well.”

At the time, Hildebrand president Harlan Bast said, “A lot of the parents will drop their teenagers off and go right down the street and go have a beer and a sandwich or something.”

Look, I don’t know anyone in their right mind who would drop their teenager in the company of itinerant circus folk near Manatee Island – at night – while they drink beer on Beach Street, but I’m overprotective that way. . .

At the time, I commented to my wife that it wouldn’t be long before J. Hyatt Brown came over from the sandy site of his future, publicly-supported, Brown & Brown headquarters building and screamed, “Get off my lawn!”

Make no mistake, it is most definitely his lawn. . . and something tells me a rinky-dink carnival midway isn’t exactly the image Hyatt and Cici envision for Riverfront Park – yet, there it sits.

Now we’re approaching late August and the rides and concessions are still ensconced.

However, Mr. Bast explained, “The city was more than gracious to us.  They tried to help us out with a discount on the rent.”

Because if Hildebrand Rides, Inc. receives a discount – I’ll just bet there are some established struggling businesses in the City of Daytona Beach that could use a discount on fees and rent as well.

I’d like to know more about that, how about you?

It’s like some weird Funhouse with one of those Hall of Mirrors that distorts reality.

But, why is this one sitting idle while the weeds grow?

Is this a legitimate Community Carnival – or has our downtown become the summer quarters for a traveling midway – and how, exactly, does that fit with J. Hyatt’s vision for the future economic development of our beleaguered downtown?

Nothing about this makes sense to me.

But maybe that was the plan from the beginning?

2 thoughts on “On Daytona Beach: Trying to make sense of the nonsensical”