Damn!  Add a few well-placed expletives and you’ve got yourself the start of a typical Barker’s View jeremiad on our collective situation here on Florida’s Fun Coast!

Except, I didn’t write these adjectives – The Daytona Beach News-Journal did. . .

They were used to aptly describe the horror most Volusia County residents felt last week when we learned that construction costs for the languishing First Step homeless shelter more than doubled – skyrocketing from $2.5 million to a whopping $5.3 million.

Sadly, the long-suffering taxpayers of the City of Daytona Beach will be covering the $2.8 million increase over the next two budget cycles.

Perhaps more disturbing – City officials simply accepted the obscene price hike with an “Aw, shucks” attitude that left many wondering how ostensibly smart people – elected officials with a fiduciary responsibility to steward our hard-earned tax dollars – could simply shrug their shoulders and accept the tried-and-true “We didn’t know” responsibility avoidance maneuver, or actually believe that construction costs have risen $100,000 per month?

While homelessness ranks high on the list of major civic challenges, the Halifax area faces myriad other issues – from transportation infrastructure to blight, dilapidation, low wages and economic stagnation – all of which will require a delicate budgetary balancing act.

That’s why this colossal price increase is so alarming to anyone paying attention.

If current estimates are correct, that places construction costs for the First Step Shelter at an estimated $321 per square foot.

And the building has yet to come out of the ground. . .

When you consider that luxury residential projects in the Halifax area – like the Ormond Renaissance Condominiums – are selling for around $208 per square foot (with a clubhouse overlooking the swimming pool, a fitness center and a private membership in the Plantation Bay Golf & Country Club, where residents can rub elbows with what passes for Volusia County royalty) – or the sophisticated “MAX Daytona” which is being built by Henry “Hard Rock” Wolfond in The Shores – with some units being pre-sold at around $300 per square foot – you get the idea that we may well be getting screwed to the floor (only the floor hasn’t been poured yet.  Still being drawn by the architect, apparently. . .)

Now, If I understand this, and I’m not sure anyone does – but if this were a commercial residential development – the sales price for the First Step luxury residences would need to be priced at over $600 per square foot range just to eek out a relatively modest profit.

Those prices might sell in South Florida – or the French Riviera – but I think most realtors will tell you they don’t fly in the Daytona Beach Resort Area.

Hell, if we had known that money wasn’t an issue, we could have hired former Bethune-Cookman University president Edison O. Jackson and TG Quantum to build the shelter – while the end product might have cost more than the annual gross-domestic product of the nation of Palau (the B-CU dorm did, by the way) – at least they could have gotten four walls and roof up before the cold wind blows this winter.

Inexplicably, the City of Daytona Beach seems intent on their “just keep throwing money at it” solution – refusing to allow the impressive First Step Shelter board any substantive say in how to reign-in cost or actually move this decaying project forward.

In my view, the First Step Shelter Board has some of the brightest, most hard-working public and private servants in Volusia County ready to help – yet, they have been relegated to airing their frustrations in The Daytona Beach News-Journal and sitting on their hands while another good idea languishes.

Look, by any measure, this highly anticipated shelter has slogged on way too long, with interminable delays in everything from architectural design to infrastructure to the weird piecemeal site preparation plan that seems tailor-made for problems.

In typical Volusia County style, whenever tax dollars are earmarked for construction – that immediately equates to a grand, “Game Changing” plan – shackled to a “Taj Mahal” facility – and clearly First Step has transformed into way more than most of us thought a homeless shelter should be – with classrooms, a medical ward, multi-purpose and computer areas, “flex use” rooms and more than a dozen administrative offices, etc. 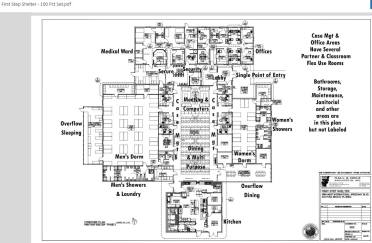 Look, I have ultimate confidence in First Step’s executive director Mark Geallis – he’s a good guy, and his heart is in the right place – but as time drags by, he’s seemingly relegated to communicating the project’s message on social media and twiddling his thumbs.

Why is it that – regardless of the project – our ‘powers that be’ seem physically incapable of getting anything done?

How could the relatively simple job of putting up a homeless shelter on publicly-owned land became mired in months of consternation, unanswered questions, mysterious delays and near constant bickering between those responsible for building the facility and those responsible for funding it?

I’ve got an idea:

Way back in the summer of 2016 when this blogsite was still in its infancy, I wrote a series of prescient posts regarding the building War of Words between the City of Daytona Beach and the Volusia County Council in the immediate aftermath of the Great Homeless Occupation of the County administration on Beach Street.

At that time, I remember thinking that east Volusia will get a much-needed homeless shelter the exact minute our “powers that be” decide how the public and private funding will be divvied up – especially by those who make a really nice life gorging on repeat local government contracts –  and others with direct access to our hard-earned tax dollars.

Apparently, some are just learning that there is a lot of money to be made in warehousing the homeless.

Way back in 2016, during the initial dust-up, Volusia officials kept holding out – then snatching back – a cheap offer of $4 million to fund construction of a proposed 200+ bed “Safe Harbor” shelter on county-owned land in the wilds off US-92 in Daytona Beach.

Hell, Daytona was duped by the county so many times it started to look like a bad Roadrunner cartoon, with City officials playing the role of the hapless Wil E. Coyote – except one was a Looney Tunes animated farce, while the municipality’s predicament was all too real.

The way the Volusia County Council dealt with this important issue (by not dealing with it) was abusive, wrong and counter-productive.  Now, the uber-arrogant Deb Deny’s – who voted against the county’s contribution to the project in 2017 – has the chutzpah to step back and heap unconstructive criticism on those actually in the arena from the relative political safety of the newspaper, “I wanted them to prove me wrong.  They sure didn’t.”

My God.  That’s what passes for “leadership” in Volusia County government?

(Hey Deb – don’t get me started on the laundry list of five-alarm fuck-ups you and your fellow dullards on the dais of power have foisted on your long-suffering constituents. . . I’ve got the time.)

Perhaps that’s why Daytona Beach is so reluctant to relinquish control – even as public opinion, and the much-needed donations and partnerships it controls – turns sour on what has transmogrified from a simple shelter to a social services program designed to somehow “cure” homelessness in our time.

In my jaded view, the News-Journal was right when it opined,  “There is no doubt that the shelter is badly needed. Because the city of Daytona Beach is ponying up the needed funding, this probably won’t further delay the shelter opening. But it has seriously damaged the trust of the city’s current, and potential, partners, and treated Daytona Beach residents like piggy banks available to be tapped at will. They deserve answers.”