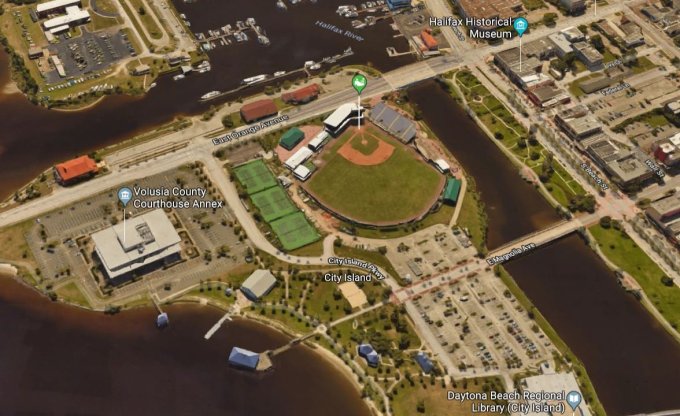 Late last night, a smart friend read an online piece by the outstanding reporter Eileen Zaffiro-Kean in The Daytona Beach News-Journal entitled, “Jewel for Sale? Daytona Beach looks to clear way for private development on City Island,” and remarked that, to the uninitiated, Barker’s View might appear to be the ramblings of a weird soothsayer.

The work of some prescient seer with the clairvoyant ability to tell the future – citing the fact that my bizarre opinions on the important issues of the day invariably prove true in time.

As an example, my friend quoted from a piece I wrote almost exactly one year ago entitled, The Grand Plan:

“Regular readers of this forum know that I harbor a conspiracy theory that, based upon mounting evidence, our ‘powers that be’ have secretly constructed a “Grand Plan” for the future of the Halifax area – something the rest of us, to include our current elected officials in municipal and county government, know nothing about.

In my warped mind, this well-orchestrated blueprint was hatched by Volusia’s powerful camarilla of political insiders – the uber-wealthy donor class who have gained near total control of our democratic processes through massive campaign contributions to hand-select candidates – and a willingness to groom and protect (now former) County Manager Jim Dinneen, despite his many glaring shortcomings.

I also believe that this scheme was clandestinely advanced under cover of darkness without any public input and outside any normal or reasonable budget, planning or oversight processes.

To ensure that all the right last names receive maximum return on their financial investment in developing and fostering this bastardized political process we call “local government” in Volusia County.

Payday is coming – and everyone who is anyone is already posted at the trough.

In fact, I believe we have been seeing the puzzle pieces drop into place for the past several years.”

Then – the Word According to Barkstradomus:

“And, if our doddering fool of a County Chair, Ed Kelley’s, verbal slip can be believed – we can kiss public facilities and amenities on City Island goodbye when they package and sell that sweet slice of the pie to some speculative developer.

(Trust me.  City Island is necessary to complete the “package” – and they will be coming for it.)

Then, last fall, the recognized High Panjandrum of Political Power, J. Hyatt Brown, demanded (by threatening to take his football and move to Atlanta) and immediately received, some $15.5-million tax dollars to develop a monolithic headquarters with his name at the top, also in Downtown Daytona.

Now, our own Camera stellata over at the Volusia CEO Business Alliance – a private consortium of quadrillionaires who, under the stewardship of the American Music Festival’s own Dr. Kent Sharples, figure out inventive ways to use our money to fund their projects – is spending freely to “educate” the great unwashed hoards who exist solely to fill scullery jobs and pay exorbitant fees and taxes – on why we should welcome yet another money grab in the form of a half-cent sales tax this fall.”

At the time, I was laughed at by our ‘powers that be’ – labeled a heretic and dismissed as a madman whose opinions were little more than maniacal ravings.

Now, the evidence has become too shocking to ignore. . .

According to the News-Journal, Daytona Beach officials have been mysteriously working “behind the scenes” to remove century-old deed restrictions on some 97-acres of public lands comprised of City Island, Manatee Island, Riverfront Park (soon to be known as the J. Hyatt Brown Grande Esplanade) and adjacent parcels “…so they can ink deals with private developers interested in the public land.”

You see, over 100 years ago when these beautiful spoil islands were deeded to the City of Daytona Beach, the caveat was that the land had to be used exclusively for “public purposes forever,” and would return to the State of Florida if the city ever sold or leased it to a private entity for any private use.

Well, in this mercenary era where the rich get richer and those of us who pay the bills are expected to suffer in silence – the term “forever” means exactly jack shit.

You see, in December 2018, former Governor Rick Scott and his cabinet voted to lift all of the deed restrictions on the City Island property – so long as the citizens of Daytona Beach agreed to pay the state some $8.77 million.

Jesus.  That was bold even by Slick Rick’s fast and loose standards. . .

Now, freshman state Representative Elizabeth Fetterhoff (R-DeLand) has filed a bill to allow all of the restrictions to be dropped for free – apparently arguing that since the land is already owned by taxpayers, one government entity shouldn’t be forced to pay another for it.

This news sent a shock-wave through the Halifax area – with many coming to the sudden realization that their worst fears have finally been realized.

Rather than calm the fears of his anxious constituents, Daytona Beach City Manager Jim Chisholm essentially called anyone who felt blindsided by this sneak thievery fools for not figuring this byzantine scheme out on their own:

“We had meetings with the City Commission when it was talked about,” Chisholm said. “It was not a secret. Everybody who was paying attention knew about it.”

Even the ultimate insider, King J. Hyatt Brown, who is actively breaking ground on a $60 million glass and steel headquarters building for his billion-dollar insurance company just steps away from the property – and donating some $15 million to renovate Riverfront Park – told his subjects that he was also dumbstruck by Mr. Chisholm’s revelations.

I can assure you that no one pays closer attention to the machinations of government than J. Hyatt Brown – so, someone’s not telling us the whole truth – and Mr. Brown doesn’t strike me as someone who likes surprises. . .

Apparently, Mayor Henry was well aware of the intrigue – commenting that if Ms. Fetterhoff’s bill fails, he is prepared to scrounge the $8.77 million to pull the rug out from under his astonished constituents – even as he and his colleagues on the dais of power try and convince us to self-inflict a tax increase to pay for unchecked sprawl.

(Riddle me this: Why is it our elected officials can always find money to support the needs and whims of political insiders – yet cry the poor-mouth blues whenever it comes to providing essential infrastructure and public services?)

Look, I’m nothing special – a blind pig wandering the political wilderness of Florida’s fabled Fun Coast – tilting at windmills and haranguing those elected and appointed officials who have hijacked our system of governance and turned it into a cheap vendue, where the needs and wants of those of us who pay the bills have become a distant second to those of the ‘Rich & Powerful’ who rule like unaccountable potentates through their elected intermediaries.

But this is something different – more sinister – and infinitely more disturbing than our run-of-the-mill political cronyism.

It speaks to something darker – something that works against the concept of unity and community – and confirms our fears that municipal and county government have dissolved into little more than cheap facilitators for real estate developers and builders who, during our last election cycle, donated $1 of every $5 in campaign contributions to their hand-select candidates.

Once lost, the public trust is almost impossible to restore.  But no one who should seems to care about that anymore.

I urge you to pay attention, my friends.

This one bears watching.

4 thoughts on “Seeds of Awakening: Have our worst fears been realized?”