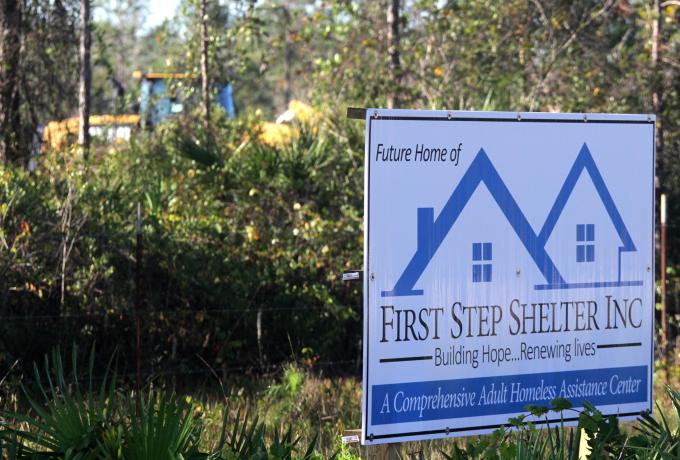 There, I said it.

But it doesn’t matter what I think.

This afternoon, the much-maligned members of the First Step Shelter Board will meet to determine their future – and decide just how much pain and suffering they are willing to endure, personally and politically, to help solve one of the most entrenched problems of our time.

In my view, there is honor in walking away from toxic circumstances that no longer serve the best interests of the community – when you cease to have even a semblance of influence in the outcome – and refuse to give tacit approval to an increasingly mysterious endgame gone haywire.

Sometimes the best-laid plans of mice and men are doomed from the start – and, once again, those who control our destiny here on Florida’s Fun Coast have proven there is no problem, large or small, that they can’t exacerbate with in-fighting, selfishness and good, old-fashioned political hubris.

After years of heel-dragging, the beleaguered First Step Shelter, which may or may not ultimately become the Halifax area’s first homeless assistance center, is at a pivotal point in its convoluted evolution from a blustery stand-off on the front steps of a Volusia County administration building in downtown Daytona Beach.

To their credit – and ultimate detriment – in the face of Volusia County’s complete inaction on this malignant social and economic issue that has affected every community in the region, the City of Daytona Beach took firm ownership of the “homeless problem,” and, after a series of fits and starts, settled on a plan that seemed to generate real buy-in from several key stakeholders.

Perhaps most important, the First Step Shelter, as it came to be known, would be governed by a board consisting of elected and appointed officials and community leaders from the various cities who pledged to fund recurrent operating costs and provide guidance, stewardship and equity – a wise choice whenever disparate tax dollars are commingled. . .

It seemed like the perfect symbiotic relationship – providing the City of Daytona Beach a degree of political insulation while protecting the varied interests of the other municipalities involved – and all it required for real success was marginal cooperation and fair play.

Some heavy-hitters signed on for the effort, and an executive director was hired – then, after months of stagnation – earlier this year the prefabricated walls of the structure began to take shape.

Unfortunately, as happens more times than not, the specter of political division and protectionism took hold – and when talk turned to who would fund what and when – it seemed the project suddenly and irrevocably derailed.

The City of Daytona Beach refused to release information critical to administrative goals and fundraising efforts to the First Step Shelter Board – then, executive director Mark Geallis abruptly resigned, describing irreconcilable conflicts and a lack of access to the real players that made his position untenable.

Recently, the Daytona Beach City Commission inexplicably set upon those same board members who volunteered their time and talents to help – pointing fingers and blaming the governing board for the myriad delays and still unresolved questions that surround the shelter’s operations – before putting a figurative gun to their heads with a threatening motion to disband the First Step Shelter Board altogether.

(Don’t Daytona Beach city commissioners realize that if they disband the shelter board now, the fault for this ugly debacle lays firmly on their shoulders?  What will they do with nowhere to place blame – or when once promising public funding sources evaporate before their eyes?  I mean, the project could implode altogether, and the tax-funded land clearing, infrastructure, drainage, retention ponds and acres of site improvements that we paid for might fall to opportunistic speculative developers who will put up yet another “theme” subdivision in the pine scrub rather tha – wait, what. . .?)

Sorry, I got lost in one of my infernal conspiratorial rants. . .  After all, public funds would never be used to reduce developers overhead under the guise of a failed homeless shelter – that’s crazy talk, Barker – have another drink. . .

Jeez, I get out there on the fringe sometimes, eh?  Where were we?

Now, we’re told that the First Step Shelter may not become a homeless assistance center at all, but rather some hodge-podge of services called a “jail diversion program” – where people seeking shelter are interned in a hierarchical system where ferine subhumans sleep in the dirt outdoors, humans progress to floor-space inside and gainfully employed “residents” graduate to a cheap bunk bed in some purgatory between a jail cell and the mean streets.

I don’t know much – but unless things have drastically changed since I got out of the business – I do know that law enforcement is woefully ill equipped to deal with the myriad social, medical and psychological causes of homelessness.

Sheriff Mike Chitwood’s recent suggestion of a “hybrid” program administrated by his agency, the Daytona Beach Police Department and Volusia County Jail officials seems like a 180-degree diversion from what Volusia County residents were sold when our ‘powers that be’ gathered in their finery for the groundbreaking ceremony that bright December morning in 2017.

When the Reverend L. Ron Durham lauded the assembled politicos for their inspirational vision?

“It is because of all of you that we have now come to this historic day in the county of Volusia,” Durham said. “First Step Shelter, and all that it represents, is in an inspiration to all of us that good works can be achieved by communities that share a common vision.”

With the recent success of Daytona Beach’s panhandling ordinance – a law which effectively removed ragtag mendicants from every major intersection in the city – most citizens have gone back into hibernation.

After all, when it comes to the “homeless problem,” out of sight means comfortably out of mind.

Maybe Sheriff Chitwood’s plan for a cut-rate alternative to the incredibly expensive revolving door of incarcerating homeless persons for nuisance crimes has legs – I don’t know – but it’s certainly better than nothing.

(And, being the political voyeur that I am, it will be interesting to see what the Sheriff’s detractors on the dais of power in DeLand will ultimately have to say about his confederation with Daytona Beach City Manager Jim Chisholm. . .)

But, whatever ultimately becomes of the First Step Shelter, in my view, it will long stand as a troubled monument to the political ineptitude that continues to plague the long-suffering residents of Volusia County and proves, once again, that our path forward on the real issues we collectively face will be dark and slippery for many years to come.

3 thoughts on “On Volusia: Purgatory and Paradise”