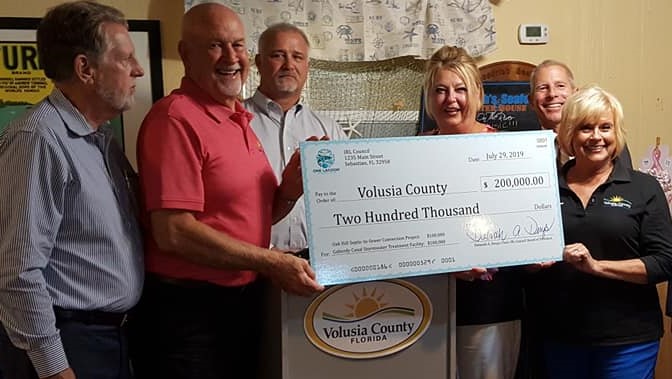 Earlier this week, the faux conservationists of the Volusia County Council joined with members of our state legislative delegation for a meeting of their exclusive mutual admiration society to congratulate each other’s performance in wheedling a paltry $450,000 – split between the City of Oak Hill and Volusia County – ostensibly for restoration of the imperiled Indian River Lagoon.

The introductions of the “honorables” went on for over ten minutes. . .

To their credit, council members Heather Post, The Very Reverend Fred Lowry and Barb Girtman were conspicuously absent from the over-the-top pageant of political vainglory.

Congressman Michael Waltz was in attendance to tout a recent committee vote which moves his amendment adding the Indian River Lagoon to the South Florida Coastal Clean Waters Act.  If approved, Waltz’ amendment would include northern portions of the lagoon in a convoluted multi-year “assessment” of algae blooms that have already killed thousands of acres of sea grasses, fish and wildlife.

Considering that many South Florida waterways are being turned into a fetid guacamole by what everyone (except, apparently, our state and federal government) attributes to nutrient runoff – and the fact any child with an aquarium understands the nitrogen cycle – it’s nice to see that those charged with protecting our environment are finally getting around to “assessing” the situation. . .

(I happen to like freshman Congressman Waltz – he’s doing good work – but perhaps the next time he finds himself in a room full of fawning local politicians – with no ‘regular Joe’s’ in attendance – perhaps that should be a clue to take his leave – because he’s being used as a prop. . .)

During her seemingly endless self-congratulatory gabfest, Ms. Denys gushed, ad nauseum, about how hard our politicos have worked to bring state and federal dollars to Southeast Volusia – which will no doubt be distributed to various consultants, corporations, contractors and hangers-on. . .

These are the very assholes who have systematically approved rampant, out-of-control growth from Farmton to the Flagler County line – sprawl that continues to contribute to the abject destruction of our sensitive wetlands and estuaries – who continue to lie to us about their demonstrably bogus commitment to “clean water” as a gaudy political ploy.

The meeting turned into a crude cartoon when our doddering fool of a County Chair, Ed Kelley, who continues to deny scientific evidence of sea level rise – lest it slow the rapid destruction of our natural places by his greed-crazed political benefactors in the real estate development community – actually had the balls to be recognized in the same sentence with environmental funding. . .

This stomach-turning soiree was also attended by Senator Tom Wright and Representative David Santiago – who represent our compromised state legislature that recently gutted local land use regulations by neutering a citizens right to challenge the adverse impacts of development in their community.

The same legislature that has stood silent as tons of sewage sludge is dumped near the headwaters of the St. John’s River and beyond.

It seems like everyone-who-is-anyone in Volusia County politics was on-hand for the goofy check presentation ceremony – except those of us who pay for it all.

Frankly, it was nauseating to watch these eco-poseurs jockeying for position behind over-sized checks representing our money in a craven effort to convince us they care.

These preening phonies make me sick.

Don’t take my word for it – watch the video.

While the Indian River Lagoon Council has provided funding for some valuable studies, technical assessments and shoreline restoration projects – it also has a tendency toward self-centered spending that, in my view, has little direct effect on the myriad threats to the lagoon’s water quality.

Let’s take a look at a few of the way’s public funds and donations allocated for restoration and mitigation under the Indian River Lagoon National Estuaries Program (IRLNEP) have been spent in the past few years:

$50,000 to a corporate entity to assist the IRLNEP to “revise” the 2008 Comprehensive Conservation and Management Plan.

$50,000 for “brand engagement” of the IRLNEP’s “One Community – One Voice” initiative.  Apparently, an enigmatic marketing program designed to “. . .build upon the One Lagoon concept and succinctly articulate the activities and value proposition of the IRLNEP.”  (Say what?)

$100,000 to a corporate entity for “technical support and data management.”

$80,000 to three “consultants” for technical grant-writing assistance for “stakeholders.”

$100,000 for “Brand Activation and Implementation,” which, according to the IRLNEP’s almost undecipherable summary, “Deliverables include 2 half-day enculturation sessions, production of a learner’s guide summarizing important IRL-focused topics, audio production of compelling, personal IRL stories for up to 50 stakeholders, creation of a One Voice web page to house archived audio/photo/video experiences.”

(You just know anytime there’s an “enculturation” session it’s going to be expensive. . .)

While the lagoon continues to suffocate.

While these shitheels are slapping each other on the back, positioning themselves for even “higher office,” posing behind expensive marketing materials paid for with our tax dollars and donations – the bulldozers and industrial pumps continue to roar – and we inch ever closer to drinking our own reclaimed sewage in the name of progress. . .

The proof of how much this wholly compromised gaggle of half-wits and others like them truly care about our environment is evident in the rapid decline of our springs, the horrific lesions appearing on fish, the toxic algal blooms that are slowly strangling our rivers and estuaries, the wholesale destruction of our aquifer recharge areas, kowtowing to political donors from big agriculture and the slash-and-burn land clearing practices that are obliterating wetlands and wildlife habitat in exchange for more-more-more “theme” developments and strip malls.

This is exactly what it looks like when politicians lose the capacity for shame.

4 thoughts on “On Volusia: Eco-Poseurs on Parade”