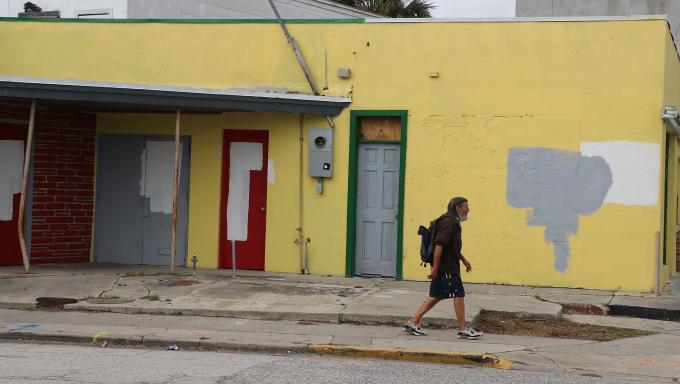 “It’s not Daytona.  It’s Dirtona,” said Enrique Zahn, an east International Speedway Boulevard property owner since the early 1990s who has grown weary waiting for things to improve on the road.”

“We are nobody,” Zahn said.  “It’s controlled by the powerfuls.”

A spot-on assessment of our current social, civic and economic situation from someone actually in the trenches, a small business owner trying desperately to scratch out a living in the Halifax area’s artificial economy.

This week, we learned that the long-awaited East ISB revitalization project isn’t coming anytime soon – and that is devastating news for struggling businesses and property owners – and anyone else who has been waiting patiently for something, anything, to bring hope to our beleaguered beachside.

So, for at least the next three-years, this stretch of abject dilapidation that marks the city’s main gateway to what was once “The World’s Most Famous Beach” will remain a rotting, graffiti-covered monument to the apathy and neglect that is slowly killing a once vibrant tourist economy – as the real money continues its retreat west.

Tragically, despite the controversy surrounding the roundabout, the East ISB revitalization project was the only shred of optimism left.

Because it’s been almost two-years since the Beachside Redevelopment Committee, which was formed in the aftermath of The Daytona Beach News-Journal’s scathing exposé on the deplorable condition of our core tourist area, presented its bureaucratically neutered findings to the Volusia County Council.

In my view, the BRC – comprised of all the right last names, heavy hitters  like Albright, Bowler, Ghyabi, Lichtigman, Sharples, Grippa and Henry – represented our last/best hope for substantive change.

Unfortunately, when the report was rolled out, Volusia County Councilwoman Billie Wheeler brought a cruel false hope when she enthusiastically vowed that the recommendations (of what turned out to be little more than a time buying political insulation committee) would not be put on a shelf:

“I am fighting with you on this,” Wheeler said. “This is my district, and we do have a plan of action but I want to make sure it is not one of those plans of actions that goes on the shelf, and I can tell you I am 100% committed to doing whatever I need to do in collaborating with this group on getting things moving.”

Where is that “plan of action” Ms. Wheeler?

Call me a soothsayer – but, despite the denials of our Halifax area “Hospitality Gurus” – I recognized early that our struggling tourism industry was in serious trouble – hemorrhaging revenue as the “product” continued to decay – and it had nothing to do with hurricanes or fickle air carriers.

So, as the beachside committee’s report sits gathering dust on some groaning shelf in that dank place where good ideas go to die in Volusia County government – we absorb yet another punishing kick to the gut as we watch our “brand” slowly die. . .

Most places with a sense of pride in place, a strong community spirit and a civic vision –  beyond allowing gazillionaires carte blanche to construct a “New Daytona” in the pine scrub west of town, as they feed greedily at the public trough – would be working collaboratively with residents and business owners to correct the decades of blight and dilapidation that continues its malignant spread.

They would be struggling mightily to protect and curate what remains of our core attraction and manage our most important natural amenity in a way that would enhance our unique traditions while investing in historic beachside neighborhoods and encouraging entrepreneurial investment while supporting existing small business.

In a weird reversal of blame that could only happen in Daytona Beach, City Commissioner Quanita May, who ostensibly represents East ISB, goaded desperate business owners on the Boulevard of Broken Dreams – demanding that they throw good money after bad to “overhaul and modernize” – even though most remain in the dark on how much of their property will be lost to the road project – or what effect the disputed roundabout at A-1-A and East ISB will ultimately have on their livelihood.

Look, there’s enough blame to go around – but what we need now is leadership – and hard answers to difficult questions.

To that end, the Florida Department of Transportation prudently scheduled an informational summit to gain public input and communicate with an anxious community on the estimated $23.8 million road project for tomorrow evening.

Unfortunately, the FDOT meeting conflicted with the elegant annual soiree of the Daytona Regional Chamber of Commerce – the very organization that should care, but doesn’t – which means the long-anticipated transportation meeting has been reset for late March.

As a result – you, me, and the besieged business community of East ISB – can wait two more months before we get substantive answers – all so the Chamber of Commerce set can tell us all how good we have it while bestowing something called the “J. Hyatt Brown Enterprise Award” on Team Volusia.

You read that right.

We truly are nobody to those who make the rules and substitute lavish banquets for civic engagement here on Florida’s Fun Coast.