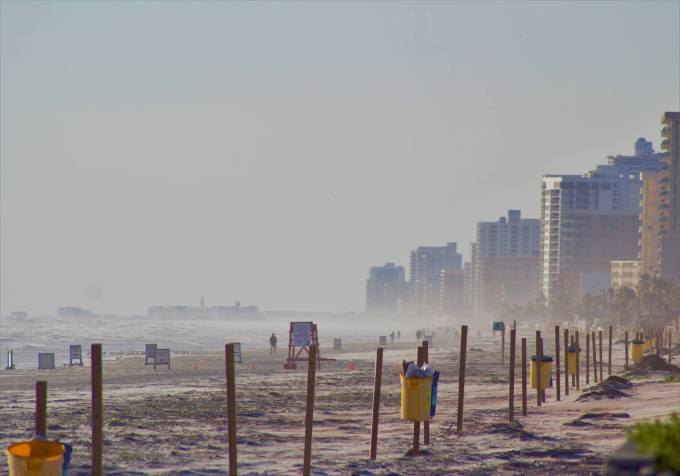 Late last month, residents of Ormond-by-the-Sea became shockingly aware of a plan – apparently hatched by the Florida Department of Transportation in cooperation with the County of Volusia – to erect a hideous erosion control fence along sections of the dune line from Spanish Waters Drive to High Bridge Road on the North Peninsula.

How did they learn of it?

A meeting to educate concerned residents on the importance of erosion control?  No.

A glossy mailer?  No.

Like most things that affect our lives and livelihoods here on the Fun Coast, the word spread like wildfire, neighbor-to-neighbor, and raced across social media when area residents awoke to crews driving chemically treated poles into the sand just feet from A-1-A, directly on top of what remains of the natural dunes. 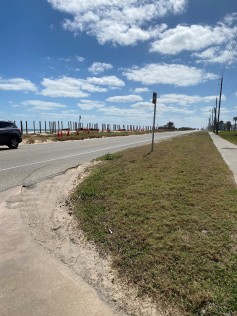 Suddenly, a storage pile of what appeared to be toxic wooden poles and rolls of slat-fencing took shape nearby, while a backhoe roared atop what remains of the natural dunes near traditional parking and beach access areas – crushing the coastal vegetation that serves to stabilize the sand – apparently to make a level surface for those godawful poles. . .

I guess statutory protections against harming sea oats don’t apply when the native plants are destroyed by a state agency, eh?

Look, I’m no expert on dune restoration – but I can read reports, diagrams and suggestions from those who are – and many residents believe these ugly poles and slat-fencing are being installed incorrectly.

If the idea is to build dunes by catching and holding wind driven sand, then everything I’ve seen on the subject suggests the fencing be placed seaward of the crest of the primary dune in ten-foot long spurs spaced seven-feet apart – facing the primary wind direction – with ample consideration given for the protection of nesting sea turtles and wildlife.

In turn, once the barrier becomes 50% buried, the fence material is raised – or another strand affixed to the pole (which is impossible, now that the current poles have been cut level with the sand fence) because, according to the Florida Department of Environmental Protection guidelines, “If the sand is allowed to accumulate, the fence will not only become difficult to remove but will also lose its ability to collect sand.”

So, why is FDOT actively placing 1.8 miles of sand fencing parallel to the beach, literally on the shoulder of a scenic state road with little, if any, notice – or apparent adherence to established FDEP guidelines?

And why would a state agency, ostensibly accountable to the taxpayers who fund it, tell members of the media that “…workers are working cautiously so native plants aren’t lost,” even as locals stand slack-jawed, watching heavy equipment remove sea grasses and other native plants whose root systems naturally anchor dunes?

Adding to the mystery is the fact work appears to have started near the new ICI Homes Verona development on the North Peninsula – an area which, before a phalanx of “No Parking” signs were erected – historically served as a pull-off for visitors to the Ormond Beach Watchtower site.

According to reports, FDOT officials were blindsided by the outpouring of criticism over the fencing (?) – which, based upon its placement, appears to be more of a physical barrier to public beach access and parking than an erosion control fence – and they may be “taking another look” at the project going forward.

As usual, the questions continue to mount. . .

While many coastal communities are considering proven erosion control techniques – such as Geotube technology and innovative near-shore reefs, constructed of living material, which have proven effective as a sustainable, cost-effective means of shore protection – Volusia County residents continue to be ambushed by dubious projects which appear overnight.

In my view, before even more of these chemically treated poles are pounded into the dune line – and the wholesale destruction of native plants continues – perhaps we should have a larger discussion among residents, our elected officials, scientists and erosion control experts on how to best protect our shoreline and coastal roads long-term.

Look, I realize the concept of actually communicating with constituents is anathema to Volusia County beach managers who consistently operate in the shadows while our once beautiful shoreline becomes a forest of ugly poisoned poles and sign pollution – something that bears no resemblance to what many of us who grew up here knew before.

Now, it appears Volusia County Beach Management has teamed with the Florida Department of Transportation for a “maintenance project” that will effectively destroy the character and scenic value of the North Peninsula.

Make no mistake, erosion control and dune restoration are incredibly important – but many agree that a more comprehensive approach will be required to ultimately stop threats to A-1-A and beachfront development.

In the meantime, perhaps our ‘powers that be’ could learn a valuable lesson from the public outrage that, once again, results from yet another shocking “surprise project” of uncertain efficacy and purpose – one that will fundamentally change the physical appearance and accessibility of our most precious natural amenity.

We’ll be talking local issues and taking your phone calls on the “Fastest two-hours in radio!”

Listen locally on 1380am The CAT – or on the web at http://www.govstuff.org (Listen Live button)