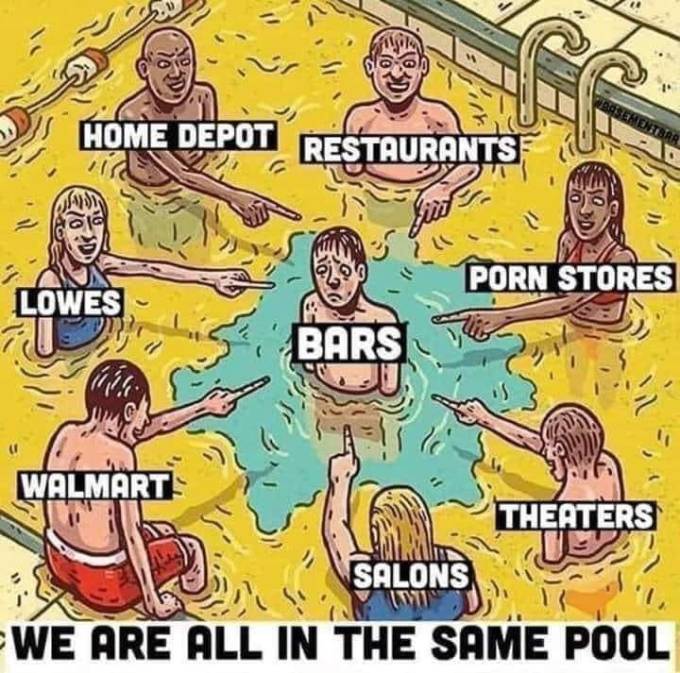 It’s no secret that we live in strange times.

And when the damage is done, the virus recedes, and things turn to some semblance of “normal,” I wonder how some of our overbearing elected officials will look at themselves in the mirror. . .

Local governments that once existed to squander our tax dollars on corporate welfare projects and cater to the whims of speculative developers – the same elected officials who gamble with our water supply, pay lip-service to the poisoning of our springs, lakes and rivers then ignore our civic needs and citizen input – have now become amateur public health experts.

That happens every time the federal government spews cash like a dyspeptic goose – showering funds on state and local governments – so long as they can “show a need” and create a roil that keeps the funding cycle running round.

Yet, these same local governments who have proven, time-and-again, that they can’t pour piss out of a boot with the instructions on the heel, suddenly know what’s best for the masses – and if it takes bankrupting every damn one of us to do it – so be it. . .

For example, the disparate treatment of bar owners is nothing short of state-sponsored discrimination – where the livelihoods of so many have been ruined – while others in hospitality businesses deemed “essential” by bureaucrats continue to operate successfully.

By government diktat, restaurants are arbitrarily allowed to thrive – while bars are doomed to insolvency – and, somehow, this official favoritism is considered moral, ethical, and constitutional under the law during Florida’s helter-skelter response to novel coronavirus?

You don’t have to go far to find a restaurant with its adjacent bar area full of customers – ordering drinks, socializing and enjoying an evening out – while across the street, a stand-alone bar is shuttered, its owners and desperate employees contemplating how they will pay the rent, feed their children and survive in an era where their elected representatives callously pick winners and losers.

Unfortunately, under the reign of Monarchical Mayor Derrick “Il Duce” Henry of the Duchy of Daytona Beach, its not enough to use the full-might of government to close bars – he finds the need to crush small businesses under the heel of his iron boot with draconian enforcement actions and fines for those he subjectively deems “socially irresponsible.”

As I understand it, during the height of Bike Week 2020, when Generalissimo Henry demanded the arbitrary closure of outside bars and vendors in an eleventh-hour act of flexing his muscles, the beloved Main Street Station – the hub of Main Street’s historic Bike Week festivities and Daytona’s premiere live entertainment venue – received a citation charging “No permit for outside activities.”

At that time, the intrepid Phaedra Lee, owner of Main Street Station, voiced her concern in The Daytona Beach News-Journal that the city’s action resulted in a loss of revenue.

“We are losing money,” she said. “We can open up our inside bars but it’s too high volume.”

“Lee said the permits were supposed to be pulled 9 a.m. Sunday.”

Meanwhile, to add to the confusion and misunderstanding of Henry’s edict (which may or may not have applied only to events drawing 100 participants or more?), it was Bike Week business as usual in Ormond Beach and other neighboring communities throughout the Halifax area. . .

In my view, if Mr. Henry were trying to limit the spread of COVID-19 as his commandment suggested, what kind of misdirected, power-crazed asshole would subjectively close outside activities, forcing the throngs of Bike Week attendees inside overcrowded buildings?

Now, the Main Street Station’s very existence is in jeopardy.

Tomorrow, Ms. Lee is being hauled before the Daytona Beach Special Master to answer the Bike Week permit violation – something she strongly denies – and is accumulating legal fees to defend.

That’s excessive for a small, family-owned business trying to survive these difficult times.

Adding insult to injury, Gov. Ron DeSantis closed all bars in early April – then allowed them a short ten-day window to open with safety measures in place – then shut them down yet again after many had spent thousands of dollars retrofitting their establishments, ordering product and bringing employees back.

Meanwhile, restaurants are allowed to operate while stand-alone bars starve.

On the day of the largest surge in coronavirus infections anywhere – Florida allowed Disney World to open the theme park – demonstrating in the most perplexing way the complete failure at all levels of government to properly address this pandemic in a fair, impartial and effective way.

There is absolutely no coordination or uniformity to any of it.

Rather than establishing effective safety measures based upon CDC guidelines – then allowing business owners to open our economy and support themselves and their employees – state and local governments continue to persecute one industry while actively supporting others.

Fortunately, in Volusia County, two bar owners are boldly standing up to let Gov. DeSantis know there is some shit they won’t eat.

According to a News-Journal report:

“Gregory Trent, who owns the The Crooks Den and the Sports Den Billiards and Pub, both in South Daytona, and Patricia Miracle, who owns the Seaside Tavern in Ormond Beach, filed the lawsuit through their attorney on July 3 in Volusia County Circuit Court against DeSantis and Halsey Beshears, who is the secretary of the Florida Department of Business and Professional Regulation.”

This isn’t about preventing the spread of disease – it’s about basic fairness – and the right of citizens to be free from arbitrary and capricious government decrees, openly discriminatory practices that pit neighbor against neighbor.

In my view, this is what happens when we begin trading away civil liberties for a false sense of safety.

I could be wrong.

Please join us locally at 1380am The Cat – or internationally on the web at www.govstuff.org (Listen Live button).

Our guest this afternoon will be Volusia County Judge Chris Miller!

Judge Miller was appointed to the bench in 2018. He earned his bachelor’s degree from the University of Tennessee, Knoxville, and his juris doctor from Stetson University College of Law.

Admitted to the Florida Bar in 2006, he was a prosecutor in the State Attorney’s Office in the 7th Circuit and worked in several divisions, including the drug unit, the career criminal unit, and the homicide unit.

He also worked in a private law firm, litigating insurance claims, and interned for the Public Defender’s Office in the 6th Judicial Circuit while in law school. He currently presides over civil cases at the Volusia County Courthouse in DeLand.

Judge Miller is currently running to retain his seat in the County Judge Group 6 race.

4 thoughts on “Cinderella and the Ugly Stepsister”