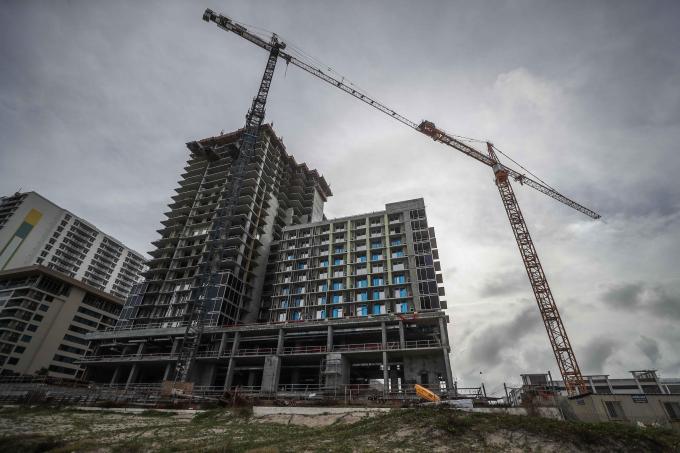 It has occupied that important space a lot over the past few years. . .

In an interesting article by reporter Jim Abbott entitled, “Beach access closed at Daytona Protogroup site: Closure comes as visitors arrive for Bike Week,” we learned that, once again, the pre-construction rules at the Protogroup site were apparently ignored when public beach access was mysteriously blocked earlier this week.

According to reports, guests at the beleaguered Sea Dunes hotel, which sits defiantly at the base of the project’s south tower, reported that the sandy path on the northside of the property was closed to pedestrian traffic, leaving Perry Schafer, a repeat visitor from Nebraska, feeling like a long-time local:

“There’s holes, barricades; it’s like an obstacle course on a public sidewalk,” Schafer said. “It’s about public safety. I can’t believe nobody’s paying attention to that.”

Welcome to the World’s Most Famous Beach, Mr. Schafer. . .

In exchange for years of inconveniencing motorists and disrupting the lives of area residents with heavy construction activity on the Oakridge Boulevard approach, Volusia County entered a “Use, Easement and Access” agreement with Protogroup which required that Protogroup maintain a temporary walkway and beach access point.

Apparently, early last week, the owner of the Sea Dunes noticed that the required access point was closed.

When she mentioned it to those who should be monitoring things – everyone from the county’s inspector to Volusia County Councilwoman Billie Wheeler were taken by surprise.

A massive high-visibility project – the tallest twin-spired skyscraper in Daytona Beach – with an ugly history of controversy and a string of violations and unexplained delays is found in open violation of a formal agreement by blocking public beach access during Bike Week and absolutely no one in a position of regulatory authority noticed?

“None of us knew,” Wheeler said of the closure of the walkway. “I don’t know what else to say other than I’m completely frustrated.”

Well, Ms. Wheeler, you could say you’re a clueless hack who has once again dropped the ball and failed your constituents – but that would require a smidgeon of introspection – something she clearly does not possess. . .

To add insult, when the City of Daytona Beach was asked about the situation by the News-Journal, City Manager Jim Chisholm’s mouthpiece, Susan Cerbone, figuratively ducked her head out of the fortified portcullis at City Hall and reported that the city’s chief building official ordered the closure due to “construction activity on the site of the project’s North Tower,” although when exactly the walkway was shutdown remains fuzzy:

When Cerbone was asked how long the access has been closed, she quibbled – “for some time.”

I guess the City of Daytona Beach’s building officials cannot be bothered keeping records of such trivialities. . .

No public notice.  No specificity.  No transparency.

And no enforcement of the established rules. . .

Apparently, there is no phone, email, or pony express service connecting Daytona Beach City Hall and the Thomas C. Kelly Administration Building in DeLand – as evidenced by the slack-jawed incognizance exhibited by everyone at Volusia County – from Councilwoman Wheeler on down.

One would think that someone at the City of Daytona Beach would have picked up the phone and advised Volusia County that they shutdown public beach access at the Oakridge approach – or that someone, anyone, at Volusia County Beach Management would have noticed that fact before now, right?

According to Councilwoman Wheeler, “They push the limits,” she said of the developer. “It’s just gone on for years and years and years. They have completely abused the relationship of being good partners.”

So why hasn’t anyone done anything about it, dammit?

I find it interesting that when Protogroup blocked the beach access point in 2018, Susan Cerbone – who accepts public funds ostensibly to act in the public interest – told us that the City of Daytona Beach had closed the walkway for “safety reasons.”

With city officials running interference – authorizing the violation of an established use agreement with Volusia County – without notifying anyone (including the public), absolutely no one can be held responsible.

In my view, this on-going insult serves as the perfect example of the Fun Coast Double-Standard.

If you own a short-term rental property in Daytona Beach that is located anywhere outside a few thin slivers of arbitrary zoning districts – the City Commission has directed that you be hauled before the special magistrate, prostrated in front of the Bar of Justice, and subjected to Draconian fines of up to $15,000 simply for managing and maintaining a peer-to-peer rental.

Or, God forbid, you own a bar, restaurant, or small business in Daytona Beach and fail to maintain lockstep conformity with the confusing mishmash of rules and regulations governing special events – because, according to Mayor Derrick “Il Duce” Henry (no doubt in his best Kommandant Wilhelm Klink accent) – “There will be CON-SE-QUENC-ES!”

But if you are a member of our influential “Do you know who I am?” set and openly violate Governor Ron DeSantis’ executive order limiting COVID-19 vaccinations to the elderly and infirm by arrogantly waltzing your wife past a queue of senior citizens so the both of you can jump the line and receive a life-saving vaccination in a gross display of political privilege – then no harm, no foul – because who you know in this town is infinitely more important than the rules – or the needs of those most vulnerable.

Want to dredge sensitive environmental lands, churn wetlands into a muddy sludge, or destroy wildlife habitat to build another strip center or “theme” community?  No problem! We’ve got a patented “hurt here/help there” strategy that’s tailormade to pull the wool over John Q’s eyes and let you do everything you want to do – where you want to do it!

But just try and stand up for clean water, environmental protection, conservation of our wild places, or speak out against unchecked development in a meaningful way and watch your life become a series of misunderstandings as you are maligned and marginalized by powerful insiders who reside in the dank corners of the Halls of Power.

If you are a megadeveloper who promises a colossal “game changer” beachfront condominium and convention center – then hang a seemingly permanent “Under Construction” sign out – block traffic, construct an unpermitted “contra-lane” on Oakridge Boulevard, mysteriously swap contractors mid-stream, ignore deadlines, refuse to respond to the legitimate questions of the working press – like reports of the developer borrowing the money from uber-wealthy foreign nationals seeking resident alien status in the United States – and other mysteries surrounding the project’s financing, etc., etc. – then everyone in a regulatory position coddles you with kid gloves – careful not to upset the applecart.

Are their two sets of rules in Volusia County?

You bet there is.

In my view, the reason Protogroup, and other developers, can do as they wish while city and county officials act like a distracted professional wrestling referee is because there is nothing anyone can do about it now!

Our elected and appointed officials castrated themselves the very minute they allowed a project of this enormity and magnitude to proceed with only “loose” agreements and a malleable performance assurance plan in place – and they cemented this impotence by failing to maintain constant oversight, inspection, and monitoring – which has clearly fostered a “do what cha wanna” laissez faire regulatory environment at the construction site – and in the executive suite.

Of course, no one can independently confirm anything – leaving it to speculation and theories – because no one associated with this debacle will return the phone calls of the working press.

Tragically, there is no going back.

In an October 2018 piece in The Daytona Beach News-Journal by reporter Jim Abbott, the former chairman of the ill-fated Beachside Redevelopment Committee, Tony Grippa, said:

“The city still lacks an overall strategy as it relates to A1A and the beachside corridor, and this is what happens when you put all your eggs in one basket.”

At this point, however, completion of the project is imperative, Grippa said.

“It would be absolutely devastating to have, in addition to all the old boarded-up buildings, now a new partially completed building,” Grippa said. “That sitting vacant and empty would really hurt the beachside, optically, economically and emotionally.”

We’ll be discussing local issues and taking your calls on the Fastest Two-Hours in Radio!

Please find us locally at 1380am “The CAT” – or online at www.govstuff.org (Listen Live button).