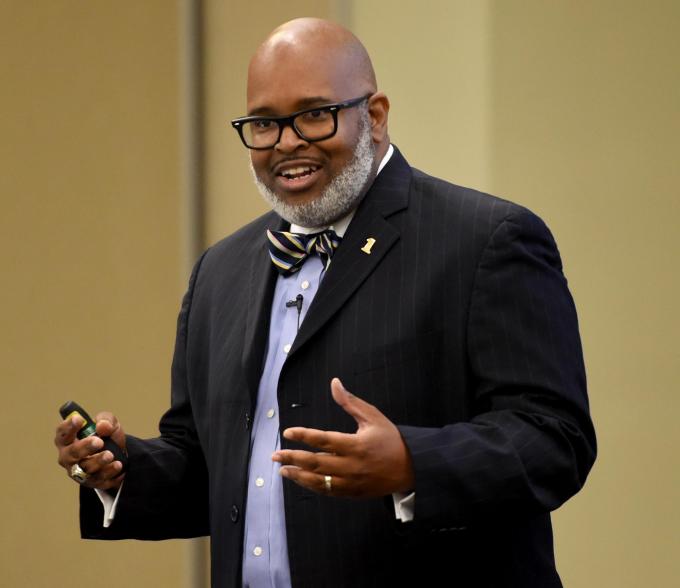 Is a self-help guru what the City of Daytona Beach needs right now?

The answer just may be yes.

You wouldn’t know it by reading our local newspaper – who has given more front page/above the fold space to a homeless knife sharpener and the inventor of a trash bag hook than the chief executive who will shape the future direction of our community for decades – but last weekend the Daytona Beach City Commission succumbed to what some, on the dais and off, felt was a horribly flawed selection process when they picked between two polar opposite personalities to select their new City Manager.

I watched part of it on DBTV.

Let’s just say when a nice, civically engaged lady like Anne Ruby stands at the podium and frustratingly calls her elected officials ‘stumblebums’ – it wasn’t pretty. . .

After hiring a highly paid out-of-state headhunter to conduct a nationwide search for qualified candidates to replace the retiring Jim Chisholm – a process that garnered less applications than the Port Orange opening, or the recent search for a Police Chief in Eustis – several finalists mysteriously dropped out of the process altogether, ultimately leaving the City Commission with just two potential managers to select from.

At the end of a very long day – which included an eleventh-hour attempt by Quanita “Call me Commissioner!” May to wipe the slate clean and start over again – a discombobulated round-robin discussion led by Mayor Derrick Henry resulted in the selection of Deric Feacher, 44, the current manager of Haines City, a community of 28,000 near Winter Haven.

Commissioner May cast the lone vote against Mr. Feacher. . .

Now, all that remains is for Daytona Beach City Attorney Robert Jagger and City Commissioner Aaron Delgado to negotiate an amicable contract with Feacher to be discussed and approved by the full commission in coming weeks.

Don’t be surprised if Mr. Feacher’s employment agreement looks nothing like yours.

Because of the highly contentious and politicized nature of the job, most city and county managers enjoy extraordinary protections – to include golden parachutes and other expensive perquisites, extras, and privileges – including a salary and benefits package that those in the private sector could not envision in their wildest wet dreams.

Is it worth it?

According to a 2018 article in the Lakeland Ledger, his evaluation by the Haines City Commission – his first as City Manager in that community – said that Mr. Feacher “…finished with a composite 3.96 from the city commissioners. Feacher was scored from 1 to 5 on 10 different categories. Scoring a 1 was considered “unacceptable.” A 5 represented “outstanding.”

I’m not holding that against him – and neither should you – for city managers, that comes with the territory.

“Just less than exceptional” evaluations aside, it appears the City of Daytona Beach is getting quite a bundle in Deric Feacher:

A relatively experienced chief executive who doubles as a charming self-help guru – the total package, all wrapped up with a stylish bowtie!

When not working his day job in Haines City, Deric C. Feacher, transforms into “The Messenger!” – a personal-growth expert and disciple of the controversial-but-charismatic John C. Maxwell (who can teach you how to become a coach, mentor, speaker, and influencer using the “Maxwell Method,” which leads to “certification” – allowing you to use books, videos, speaking scripts, guides, and presentations written and sold by, well, John C. Maxwell, as you help others become their “better selves” – for a fee, of course. . . )

“Deric C. Feacher, “The Messenger,” is the transformational speaker you need! He works regularly with people who face almost insurmountable challenges, but after hearing him speak, realize they have the tools to reach their full potential and are just one small step from success!”

I have listened to a few of Mr. Feacher’s “Let’s Get Together” podcast episodes – inspirational snippets with titles such as, “Validation is not necessary,” and “Dream Chaser or Destiny Creator” – and I must admit – after a few installments, my self-loathing isn’t nearly so debilitating. . .

Look, I realize that I am a curmudgeonly whiner who subscribes more to the P.T. Barnum “There’s a sucker born every minute” theorem than the overblown teachings of a self-help industry that has become a parody of itself (as any episode of Dr. Phil will prove) – but to each their own.

The fact is, now more than ever, we need a self-confident “leadership expert” to help save us from ourselves – even if it comes in the form of a personable guy from out of town with a great smile and a briefcase. . .

If they are honest with themselves, there are few who live or do business in the Halifax area who won’t admit that the “World’s Most Famous Beach” faces “insurmountable challenges” – or that most of the tools in our chest have been lost, stolen, or just allowed to rust away.

As a result, we desperately need a superhero to step out of a phone booth, assess our shortcomings with the benefit of x-ray vision, and rescue us from the resort town grifters, uber-wealthy insiders, and decades of monstrously self-serving politicians that have brought us to this civic, social, and economic nadir.

Is “The Messenger!” the dynamic caped crusader we have all been so anxiously waiting for?