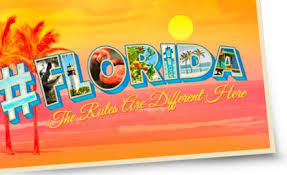 This piece was originally published in September 2017 – obviously, our ‘powers that be’ didn’t seize the opportunity. . .

Florida hangs off the continental United States like a weird appendage – a salty protuberance inhabited by an eccentric tribe that, since prehistoric times, have carved out their lives and livelihoods in the state’s swamps, pine scrub and coastal dunes.

For some, it’s the end-of-the-road – a chance for a fresh start in good weather.  For others, Florida represents the subtropical paradise of post cards, a tourist and retirement mecca for refugees from the Northeast who are trying to reclaim and recharge what’s left of a life spent servicing a corporate machine’s “customer base” that never even knew their name.

As the local, state and national media outlets flogged the impending arrival of Hurricane Irma last week (something I think we, as an advanced civilization, need to reexamine) – whipping every man, woman and child in the Southeast into a froth of fear and trepidation – residents of the Sunshine State got a stark reminder of just how vulnerable we are to the fury of Mother Nature’s processes.

Last week, Michael Grunwald, a senior staff writer for Politico and author of “The Swamp: The Everglades, Florida, and the Politics of Paradise” (Simon & Shuster 2006) wrote an excellent (if, in hindsight, slightly premature) piece entitled, “A Requiem for Florida, the paradise that should never have been.”

“The first Americans to spend much time in South Florida were the U.S. Army men who chased the Seminole Indians around the peninsula in the 1830’s.

And they hated it.

Today, their letters read like Yelp reviews of an arsenic café, denouncing the region as a “hideous,” “loathsome,” “diabolical,” “God-abandoned” mosquito refuge.

“Florida is certainly the poorest country that ever two people quarreled for,” one Army surgeon wrote.  “It was the most-dreary and pandemonium-like region I ever visited, nothing but barren wastes.”  An officer summarized it as “swampy, low, excessively hot, sickly and repulsive in all its features.”

The future president Zachary Taylor, who commanded U.S. troops there for two years groused that he wouldn’t trade a square foot of Michigan or Ohio for a square mile of Florida.”

The descriptor that I enjoyed most was attributed to an early visitor who remarked that if he owned Miami and hell, he would rent out Miami and live in hell.

I suspect if that wise sage could see things today, he would hold the same opinion. . .

In the late 1800’s, smart people realized that if man could control the flow and retention of water, much of Central and South Florida could be transformed from fetid swampland into something suitable for development – and sale.

And, quite literally, the floodgates of people and money began flowing in to the state and it hasn’t stopped for over one-hundred years.

Now, as old Robbie Burns reminded us, the best laid plans of mice and men often go awry – and those of us who choose to live here know deep in our hearts that we are but one good blow away from returning to that “God abandoned” place so aptly described by those weary soldiers way back in the 1880’s – yet, we continue to do it the same way – time-after-time – hoping against hope that we can somehow fool nature and escape the inevitable.

Our colorful history also includes pirates and privateers of all stripes who prowled the waters of Florida plundering anything of value in the name of King or greed, and openly preying on the weak or disabled.

Earlier this year I wrote in the opinion piece, “On Volusia: Gird your loins for the Big Boom!” that it appears the idea of “growth management” in Volusia County – like representative democracy – has been effectively neutered, compromised or simply sold-off to those who stand to benefit most.

After all, it’s no longer about We, The People.

When it comes to managing development on this exposed spit of land, and the threat of urban sprawl and environmental exploitation, the public is no longer considered part of the discussion – our two-cents were outbid by a guy with two-dollars.

Instead, we learn about enormously intrusive and expensive projects in ambush-style, over-the-top announcements by County Manager Jim Dinneen – or get a glimpse of what our life will look like from some glitzy corporate press release, enhanced and regurgitated verbatim by our local news media – with glamor shots of our elected officials wearing goofy hardhats on their swelled heads wielding golden shovels to turn-over damp loam atop a water recharge area or the barrier dunes in the name of “progress.”

Here, on the “Fun Coast,” our “powers-that-be” never once consider the communal impact of massive development.  They are driven solely by the all-important question of who stands to make the most money in the most expedient way possible.

Then, those who receive public funds to serve in the public interest ignore their ethical responsibilities and work quickly to remove all obstacles and assume any potential risks to the developer through the liberal application of public funds and economic incentives.

With the hindsight of the potential loss an eyewall hit by a powerful hurricane could have posed to our extremely vulnerable area still fresh in our minds – perhaps we should use this as a fortuitous, God-granted, opportunity to reexamine the environmental and infrastructure impact of proposed residential projects from Farmton to the Flagler County line.

Just maybe, before we start churning thousands of acres of ecologically sensitive lands into “brand-immersive lifestyle destinations,” we should consider the effects – positive and negative – that massive, unchecked development will have on our collective quality of life beyond the short-term benefits to a few well-connected insiders.